“Hello, I’m a Mac”, “and I’m a PC”… With this advertising campaign, the debate about whether it is better to use a Mac or a PC has been made a little more entertaining. The ad features actors representing Mac and PC machines. Obviously, Mac was faster, more secure, and more clever. Microsoft was swift to respond with its “I’m a PC” series of ads, in an attempt to rebut the PC’s image, as presented in the Apple ad.

Tutorial on How to Create Your Own South Park Video

The following video is a parody of the Mac vs. PC commercials, with the characters from South Park. It was created as the final project for a multimedia production class by students at California State University Northridge. This amazing parody using South Park-ified versions of the original ad has racked up a whopping 20 million YouTube views..

Get a Mac Campaign

The famous Get a Mac campaign was a widely broadcast television advertising campaign, launched by Apple Computer Inc. (The company later changed its name to just Apple, Inc.) The ad ran for three years, from 2006 to 2009. The ads were created by TBWA\Media Arts Lab, which was the company’s advertising agency. The ads were shown in the United States, Canada, Australia, New Zealand, the United Kingdom, and Japan.

The advertisements used in the campaign have become very easily recognizable by the public, because each advertisement followed a standard simple template. A young, smart-looking, casually dressed man introduced himself as a Mac with the words, “Hello, I’m a Mac!” Another man, dressed in a suit, replied that he was a Windows personal computer by saying, “And I’m a PC.” Both stood against a minimalist all-white background. The PC actor had a look that vaguely resembled Bill Gates (for the American market).

Both actors then briefly discussed the capabilities and attributes of Mac and PC. The PC was presented as very formal and polite, but uninteresting and overly concerned with work, and even being frustrated by the more laid-back Mac’s abilities.

The earlier commercials involved a general comparison of Macs and PCs, whereas Apple decided to focus the later ones mainly on Windows Vista and, later still, Windows 7.

The original advertisements star a young actor, Justin Long, as the Mac, while the PC was played by author and humorist, John Hodgman. Phil Morrison directed the original ads. The American advertisements also aired in Canada, Australia, and New Zealand. At least two dozen of them were dubbed into Italian, Spanish, French, and German.

In the UK, the campaign stars comedic duo Robert Webb as Mac, and David Mitchell as PC. The Japanese campaign featured the comedic duo Rahmens. Although a few of the British and Japanese advertisements originated in the American campaign, they are slightly altered to suit local sensibilities and traditions. Both the British and Japanese campaigns also featured several original ads, which have neither be shown nor imitated in the American campaign.

The Get a Mac campaign is the successor to the Switch ads that were first broadcast in 2002. Apple’s former CEO, Steve Jobs, introduced the campaign during a shareholders’ meeting the week before the campaign started. The campaign also coincided with a change of signage and employee apparel at Apple retail stores, detailing reasons to switch to Macs.

The Get a Mac campaign received the Grand Effie Award in 2007. The song in the commercial is titled “Having Trouble Sneezing”, which was composed by Mark Mothersbaugh.

Full List of the North American Ads for the Campaign 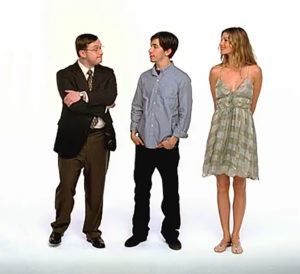