The MacBook 8,1 (12-Inch, Early 2015) computer was introduced in April 2015. Though similar to MacBook Air, this model is lighter and thinner. This model offers a high-resolution Retina Display, higher memory and storage, redesigned keyboard, TouchPad. It has only two ports: a headphone jack and a USB 3.1 Type-C port which the user can use for data transfer, charging and video output.

In the Apple’s MacBook product line, the MacBook sits below the MacBook Pro in terms of specifications. Besides, the processor and graphic performance are inferior to the MacBook Air. On the other hand, the MacBook 8,1 (12-Inch, Early 2015) is lighter and thinner than the smallest models from the MacBook Air series. It is equipped with just one USB-C port for connectivity and a headphone jack. Like the MacBook Air, this device runs OS X rather than the iPad’s iOS.

The MacBook (12-inch, 1.2GHz Intel Core M, Early 2015)features a 14-nm 1.2 GHz Intel Core M processor (M-5Y51) with two independent processor cores on a single chip. It has 512 GB of onboard PCIe-based flash storage, that cannot be upgraded). The other specifications are the same that in all three MacBook 8,1 Retina versions.

Video published on April 15, 2015 by MobileTechReview. 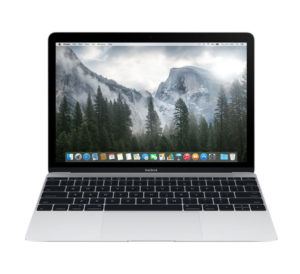