Introduced in March 1989, the Apple Macintosh Portrait Display was Apple’s first full-page monitor for the Macintosh. It had a vertical screen alignment, and was able to display one page. It used a 15-inch vertical grayscale CRT.

The following environmental conditions might distort the raster of a Portrait Display:

Warning: Module swapping cannot fix a monitor with environmental distortion problems, and adjusting a monitor with such problems alters the factory settings. Note: If the monitor has shifted up/down or right/left only, go ahead and adjust it using the centering controls. However, keep in mind that if you then move the monitor you may need to readjust the centering controls.

Before adjusting a monitor with a distorted raster, try the following:

No raster, LED off:

No raster, LED on:

Raster bulges along top of screen:

Raster stretched or compressed at top:

Raster narrow (less than 8 in. wide):

Picture is too dark or too bright: 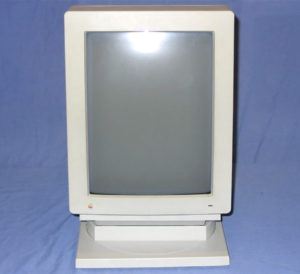