The Apple Macintosh 12-inch RGB Display was introduced with the Mac LC in October 1989. It uses a 13-inch Sony Trinitron CRT, which is curved horizontally but flat vertically. The monitor can sit on top of most desktop Macs. Apple recommended against using this monitor at maximum brightness and suggested using a screen saver to avoid phosphor burn caused by static elements on the screen, such as the Menu bar, Drive icon, and Trash.

This monitor is compatible with a limited number of Macs and video cards (see below). The case was used for both the 12-inch RGB display and the 12-inch monochrome display.

How to Connect the Display

Your display connects to a built-in video port or a video card connector on the back panel of the computer and to a grounded AC outlet. Here’s how to connect the display:

How to Turn the Display On

If the light still doesn’t come on after you’ve checked the connections, consult the troubleshooting section later in this guide.

To turn the display off, press the on/off switch again.

Once you have a program running, you can adjust your display. The brightness and contrast controls are on the side of the display. An icon identifies each control.

Can’t help but sell here. Take a close look at the prices we offer: Used Apple display for sale. 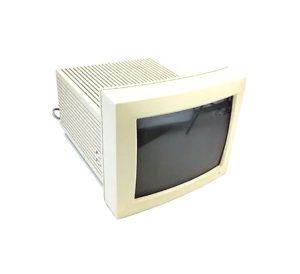