The Apple Monitor II is a Cathode ray tube (CRT) based monochrome monitor designed and marketed by Apple Computer for the Apple II personal computer series. This monitor included insignificant adjustments for the size and location of the image on the display.

In fact, the Monitor II was designed by Apple for the Apple II+ model. However it was used widely throughout the whole Apple II line.

The Apple Monitor II was introduced in 1984. At the time, monochrome monitors were very common.

From time to time your Apple Monitor II may not behave as you expect it to. These guidelines should help you overcome the most common problems that might occur.

Unusual sounds or smells emanating from the monitor. Cause: Monitor’s electronics are overheating. Remedy: Unplug power and video cords immediately, and contact your Apple dealer.

No picture and on/off switch is in ON position, but power light is out. Possible cause: Monitor is not plugged in. Remedy: Insert power cord into the outlet properly. Possible cause: Bad connection to wall outlet or dead outlet. Remedy: Change outlets or check line fuse or circuit breaker.

Display vibrates slightly: Cause: Input signal from the computer needs adjustment. Remedy: There may be a problem with the computer. Contact your dealer.

The equipment generates and uses radio-frequency energy. If the monitor is not installed and used properly – that is, in strict accordance with Apple’s instructions – it may cause interference with radio and television reception.

This monitor has been tested and complies with the limits for a Class B computing device in accordance with the specifications in Subpart J, Part 15, of FCC rules. These rules are designed to provide reasonable protection against such interference in a residential installation. However, there is no guarantee that the interference will not occur in a particular installation, especially if a “rabbit-ear” television antenna is used (a rabbit-ear antenna is the telescoping-rod type usually found on television receivers.)

A shielded cable uses a metallic wrap around the wires in order to reduce the potential effects of radio-frequency interference.

If your computer does cause interference to radio or television reception, you can try to correct the interference by using one or more of the following measures:

Consider installing a rooftop television antenna with a coaxial cable lead-in between the antenna and television.

If necessary, consult an authorized Apple dealer or an experienced radio/television technician for additional suggestions.

Price: Introductory price – around US $400. US $350 if bought with the Apple computer. Today these monitors have become collectibles and may be sold at US$ 50-100, depending on their conditions. You can always ask iGotOffer.com if your old Apple Monitor II is worth any money. 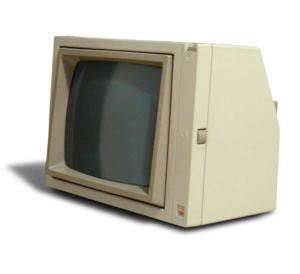