The Apple Lisa 2 was the first hardware revision of the Apple Computer’s first personal computer Lisa, released in January of 1983. Lisa 2, was released in January 1984. The Lisa 2 had the notable distinction of introducing the new Apple inlaid logo. Its price less expensive that the original model (almost twice as low). Lisa 2 also dropped the unreliable Twiggy floppy drives in favor of a single 400k Sony microfloppy. Its revised version, the Lisa 2/5 (5 for 5 Meg Profile drive) consisted of a Lisa 2 bundled with an external 5MB or 10MB hard drive. In 1984 Apple offered free upgrades to the Lisa 2/5 to all Lisa 1 owners, by swapping the pair of Twiggy drives for a single 3.5-inch drive. Apple also offered to update the boot ROM and I/O ROM. Lisa 2 had the first Snow White design language features. The last revisiom of Lisa 2 – Lisa 2/10 featured a 10MB internal hard drive known as Widget. The System I/O board was redesigned to support the new hard drive. The parallel port was removed. To upgrade from the Lisa 1 to the Lisa 2/10 cost $2495. 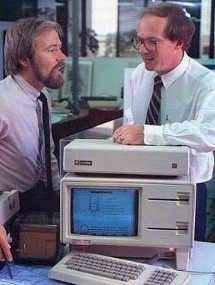