While the first Apple II clones were generally exact copies of their Apple counterparts that competed mainly on price, many Apple’s clones had extra capabilities too. For example, a Franklin model, the Ace 1000, sported a numeric keypad and lower-case long before these features were added to the Apple II line. Finally, most of the clone manufacturers chose to stop production on their own once the IBM PC became popular since it was possible to make legitimate clones of the PC which would not violate any of IBM’s patents or copyrights.

Some of Apple’s Clones

The Taiwanese Jiama SPS-109, a clone of the Apple II, which looks almost identical to the Apple II and II+, including an identical case, color, and keyboard layout. The only noticeable physical difference is the label above the keyboard.

Soviet clone of Apple II Agat, a series of Apple II compatible computers produced in Soviet Union between 1984 and 1993. They were widely used in schools in 1980’s. First mass-produced models Agat 4 and Agat 7 had different memory layouts and video modes to Apple II, which made first Agats only partially compatible. Agats were not direct clones of Apple II, but rather uniquely designed computers based on 6502 CPU and emulated Apple II architecture. That helped developers to port Apple II software titles to Agat. Later model Agat 9 had Apple II compatibility mode out of the box. Soviet engineers and enthusiasts developed thousands of software titles for Agat, including system software, business applications and rich frameworks for education.

Basis 108, a German clone for the Apple II included both a 6502 processor and the Zilog Z80, allowing it to run the CP/M operating system as well as most Apple II software. This machine was housed in a heavy cast aluminum chassis. It was equipped with built-in Centronics (parallel) and RS232c (serial) ports, as well as the standard six Apple II compatible slots. Unlike the Apple II it came with a detached full-stroke keyboard (AZERTY/QWERTY) of 100 keys plus 15 functions keys and separate numeric and editing keypads.

Pearcom Pear and Pearcom Pear II, which was larger as the first model. The Pearcom Pear II sported not eight but fourteen expansion slots. It also had a numerical keypad. Pearcom initially used a pear shaped rainbow logo, but stopped after Apple threatened to take legal action.

IRIS 8: In Yugoslavia, a Bosnian company named IRIS Computers (subsidiary of an electric company in Bosnia and Herzegovina and Yugoslavia Energoinvest) produced Apple II clones starting in the early 1980s. Their official brand name was IRIS 8, and compatibility with the original Apple II was complete. These models were expensive and hard to obtain. They were produced primarily for use in early computerized digital telephone systems, for education., in offices of state companies and R&D labs. The Yugoslav military also used these clones. IRIS 8 machines looked like early IBM PCs, with a separate central unit accompanied by a cooling system and two 5.25-inch disks, monitor, and keyboard. Elite high schools in Yugoslavia and especially Bosnia and Herzegovina were equipped with clusters of 8, 16, or 32 IRIS 8 computers connected in a local network administrated by an IRIS 16 PC clone. According to Wikipedia, the number of IRIS 8s produced is believed to be on the order of 10 or 20 thousand.

VTech’s Laser 128, an enhanced clone of the Apple IIc first released in 1984, in court. In fact, VTech had reverse-engineered the Monitor ROM rather than copying it and had licensed Applesoft BASIC from its creator, Microsoft. Apple had neglected to obtain exclusive rights to the Applesoft dialect of BASIC from Microsoft, so the VTech was the first cloner to license it. The Laser 128 remained on the market for many years, both in its original form and in accelerated versions that ran faster than 1 MHz. This clone was not fully compatible with the Apple II, but it was very close. The machine was frequently sold via mail order and mass-market retailers such as Sears, so the Laser 128 cut into the sales of low-cost competitors such as Commodore Business Machines as much as it did Apple’s. Let’s say that the Laser 128 series is credited with spurring Apple to release the Apple IIc Plus; the built-in 3½-inch drive and accelerated processor were features Laser had pioneered. The Laser 128 also had a IIe-style expansion slot on the side that could be used to add peripheral cards.

ITT 2020: ITT made the ITT 2020, a licensed Apple II Plus clone, in the UK. It has the same shape as the Apple II but was matte silver (it was sometimes known as the “silver Apple”) and was not an exact copy functionally. The device produced a PAL video signal for the European market, where the domestic US market used NTSC. Software using the BIOS worked correctly on both the Apple and ITT, but software written to access the Apple’s display hardware directly, bypassing the BIOS, displayed with vertical stripes on the ITT 2020. The Apple II itself was later introduced in the UK, and both the Apple II and ITT 2020 were sold for a time, the ITT at a lower price.

RX-8800, another Apple’s clone was produced by an unknown company. This computer had a numeric keypad, which was a new feature at that time.

SEKON: This clone was one of the best Apple II clones. Made in Taiwan, the device had the same color plastic case as an Apple II. It sported 48kb of RAM standard, and a lower-uppercase switch, located where the power light indicator was typically situated on Apple II’s. SEKON featured a 5-amp power supply which supplied ample power for add-on cards. Interestingly, SEKON avoided shipments being confiscated by U.S. Customs, by shipping their computers without ROMS, leaving it to the dealers to populate the boards upon arrival to their private stores. Often these machines would boot up with a familiar logo of the Apple II after the dealers removed E-proms of original Apple ROMS and added them in. Thus users obtained a fully Apple-compatible clone for around US$600, as opposed to US$2500 from Apple.

Quadram: it was not technically a clone, but it produced an add-in ISA card, called the Quadlink, that provided hardware emulation of an Apple II+ for the IBM PC. The card had its own 6502 CPU and dedicated 80 K RAM (64 K for applications, plus 16 K to hold a reverse-engineered Apple ROM image, loaded at boot-time), and installed “between” the PC and its floppy drive(s), color display, and speaker, in a pass-through configuration. This allowed the PC to operate in a dual-boot fashion: when booted through the Quadlink, the PC could run the majority of II software, and read and write Apple-formatted floppies through the standard PC floppy drive. Because it had a dedicated processor, rather than any form of software emulation, this system ran at nearly the same speed as an equivalent Apple machine. Another company, Diamond Computer Systems, produced a similar card called the Trackstar, that had both a 6502 and a Z80, allowing use of software for both Apple DOS and Apple CP/M. The Trackstar also had a connector allowing use of an actual Apple floppy drive, which enhanced its compatibility with software that took advantage of Apple hardware for copy-protection. 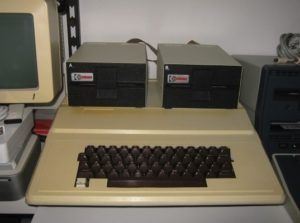