The Apple Mac Pro 5,1 (Mid 2010 Server), introduced in July 2010, features a single 2.8GHz Quad Core 45nm Xeon W3530 processor. Because it was originally configured with 8GB of DDR3 ECC SDRAM at a processing speed of 1066MHz, its four memory slots are able to support up to 48GB. Soon after its launch, when various benchmarking tests were conducted, the comparative advantage of Xeon’s multiple cores became apparent. While designed for professionals, the 2010 model’s components are easy to reach, and an everyday user can upgrade or replace them, if desired. Among the Mac Pro’s major advances are its improved optical drive speed and an impressive graphics card.

This model was introduced as a substitute “high-end” server configuration for the discontinued rack-mountable Xserve line. TheMac Pro Server could be classified as a throwback to the days of the Mac Server G4 series where Apple shipped a server version of an otherwise identical Power Mac G4. It was often configured with more RAM and/or a larger hard drive. This model came with pre-installed server software.

While the Mid 2010 Server models are almost visually identical to their Early 2009 Server predecessors, they’re equipped with faster graphics. Their higher-end Westmere equivalents exhibit even faster processors; through custom configuration, as many as twelve cores can be achieved.

I built the most powerful 5,1 Mac Pro in the world [Video] 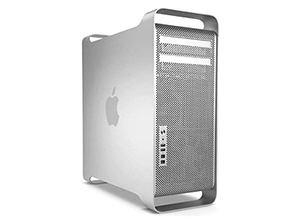