Apple TV 1st generation (also referred to as Apple TV original and Apple TV 1,1) is a computer equipped with an Intel processor. This made it possible to stream iTunes content from as many as five Macs or PCs to an enhanced-definition or HD TV.

The Apple TV 1st generation was a digital media player, micro console, a network appliance, and entertainment device which could be connected to any widescreen TV with either HDMI or component video. It supported both analog and digital audio via RCA and optical S/PDIF outputs. Apple also released a new version of the Apple TV software, which allowed users to rent HD movies directly from the device.

This video shows some things you can do with an old 1st generation Apple TV.
Published on December 10, 2014 by the 8-Bit Guy 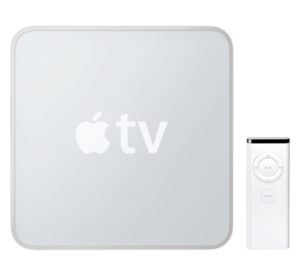