The Apple TV 4K (5th Generation) was introduced into the market on September 12, 2017. Despite the device’s external similarities to its predecessor, the Apple TV 4K features majorly updated internal features, paired with support for 4K and HDR movies, should the Apple TV be connected to a capable television, the HDR providing additional brightness and noticeably greater contrast.

Visually looking mostly identical to its predecessor, the difference between the two can be told by a number of visible cutouts on the new model, allowing a flow of cool air to reach the updated processor chip.

The Apple TV 4K (5th Generation) is presented in two storage offers: the 32GB model, priced at $179 at the time of its release, and the 64GB, priced $199. The increase in price asserted by Apple since the previous model of the Apple TV is not large, suggesting the customer lean towards the newer model.  The suggested storage is proven to be sufficiently enough, since the device streams content as opposed to downloading it.

The Apple TV 4K (5th Generation) offers new additional Apps and features previously unavailable. The graphics of the device guarantee a stronger picture and sound than ever before.

Video published by The Verge on September 21, 2017 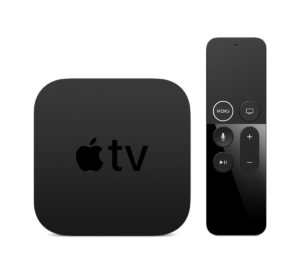