Apple Watch includes the Alarm app for setting alarms. This app enables you to set as many alarms as you need to be set on directly on Apple Watch. You can choose what days of the week you want the alarm to repeat. You can enable or disable the snooze function (this lets you get a few more minutes before the alarm rings again). You can name the alarm in order to identify it easily. After setting an alarm you can set it On or Off as needed.

How to Set Alarms

You can use Siri to set alarms. To do so:

Deleting an Alarm From Apple Watch

A Few More Words about Alarms

Nowadays, when scientists have proved the relevant nature of the sleep cycles for the human health, alarms clock are not what they used to be in the pre-digital era. In order to attract a user’s attention, the developers strive to feature their apps with every function one can think of. Alarms Apps can monitor a human’s sleep, a human’s health and the environment parameters. And of course, the alarms apps allow to pin the alarms to the events or tasks in time, I.e. flight departures, pills take, meetings, etc. Here’s the list of Smart Alarms available for the Apple Watch.

Cleu: Cleu Apple Watch App personalizes the wake up experience. The alarm sounds vary between longer and shorter tunes in the latest version of Cleu alarm app for Apple Watch. It’s not just an alarm app but more a digital assistant. It piggybacks the calendar app thus allowing to schedule one’s day with the events and tasks put in it. Cleu Apple Watch App features the environment control as well. It works with Nest (Thermostat) to control the home temperature. Among other features are PowerNap option and bilingual support (English and Spanish).

iDigital Big 2: iDigital Big 2 Alarm Clock HD features a digital display with 6 colors and the 4-day weather forecast. It can work as a nightstand to see the time in the dark. The time display is similar to that of an iPad. The app can be installed across other Apple devices like iPad and iPhone.

Alimer: Alimer Apple Watch and iPhone App is simple and professional alarm app for Apple Watch which boasts also adjustable timers. The app allows to set weekly alarms to repeat every week. The sound options include snooze, long alarm sound and pre-alarm. The latest version of Alimer features the alarm list on the Apple Watch, besides, the alarms can be turned on/off from the Watch itself. A user can delete alarms, re-order and name them.

Wake for Apple Watch: Wake Apple Watch App helps a user stay awake, quite true to its name. Wake app sends you constant taps on your iPhone or watch to keep a tired user awake and coherent. The feature is activated with the iPhone. A user can set a frequency (time period) on a particular day to send taps to stay aware about urgent works. Status can be checked by tapping frequency on the Apple Watch.

Seafish Alarm: Seafish Alarm Apple Watch App nice feature is the stunning animations set on the display. More animations are available through the in-app purchases. The alarms are set with the iPhone paired with the watch. The alarm buzz is accompanied with the vibrations. Set multiple alarms by using iPhone which is paired with your watch. The watch vibrates when the alarm buzzes. Seafish Alarm Apple Watch App supports English, Japanese and simplified Chinese language.

Sun Alarm: Sun Alarm Apple Watch is a midget app that supports the Apple Watch and is also available for iOS devices. Unlike other apps this one calculates the sunrise and sunset time of a user’s location.

My Clock 2 with Apple Watch: My Clock 2 Apple Watch App picks up drawings from the paired iPhone. The music records, stored on the same iPhone can be used as the alarm tones.

How to set an alarm on the Apple Watch [Video] 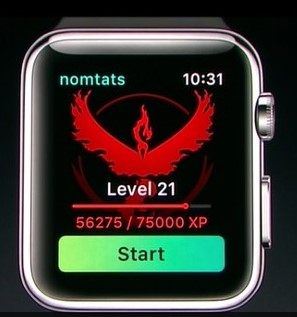