How To Check Apple Watch Storage and Usage

If Apple Watch is running short of storage space, think about deleting the Music App first, because you can put up to 2 GB of music on Apple Watch. If you have added many songs, target and remove as many of them as needed. To delete, tap Music icon on the My Watch screen. Next, tap Playlist Limit on the Music screen, choose a smaller amount of storage or a smaller number of songs on the Playlist Limit screen. Alternatively, sync a smaller playlist. You can also remove games installed on Apple Watch, consider doing it to save storage.

How to Check Storage Used by Apps

When you run multiple apps on your Apple Watch, the device may slow down. It is possible however to check which app is consuming more data, and for this you have to keep a track of such apps.

First at all, to check how much of memory each app is using, make sure that the iPhone is properly paired with the Apple Watch. Then proceed as follow to check storage used by each of Apple Watch apps:

Now you can see the storage header to find out how much of eight GB available is used and how much space is remaining in your Apple Watch.

Many experts said that some apps hardly occupy two or even less MB of data. But even if you find any app consuming more than 100 or 200 MB of storage, you can not uninstall any apps directly from your Apple Watch. You will be able to do so only for iPhone apps where you can uninstall apps from the storage section directly.

The Music app: You can keep up to 2GB of music on your Apple Watch’s 8GB of built-in storage. The default storage limit is 1GB of music, so to make room for more, you should visit the Apple Watch app on your iPhone, and once there tap Music in the list of apps. Tap Playlist limit to toggle between the low (100MB/15 songs) and high (2GB/250 songs) ends. Tap the Synced Playlist setting, and pick a playlist from your iPhone to sync to your watch’s local storage the next time your iPhone is plugged in.

Activity App: Activity shows three concentric rings: the large red ring is for Move (a calorie-burn goal based on your general activity level, and easily adjusted with a force touch), a medium green ring for Exercise (30 minutes per day), and a small blue ring for Stand (standing up and moving around for at least one minute per hour, 12 hours out of the day). Tapping into the full app also includes separate screens for each metric, and you can swipe between them, plus scroll down to see a graph showing what times of the day you moved, exercised, or stood. The Apple Watch will prompt you to get up and move around at 50 minutes past each hour, if you didn’t already log at least a minute of activity in the hour so far.

Messages: You can reply to texts right on the watch, by choosing a pre-written snippet (those are easily edited in the Apple Watch app on your iPhone) or tapping the microphone to dictate a reply to Siri. The Messages app for Apple Watch has exclusive animated emoji that you can send to anyone, not just other Apple Watch users. They’re adorable, but what isn’t super clear is that you can use the Digital Crown—or smear your finger around the screen without swiping to the next page—to get different options for the animated face, heart, and hand. The standard iOS emoji are here too. The best part of Messages is how smart the notifications are. 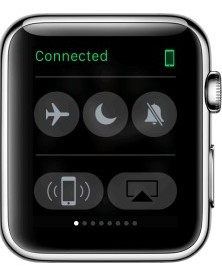