The end of the century gave Apple new life, but there was one big obstacle to tackle: Clones, as clone vendors such as Power Computing. Clones were taking customers away from Apple and were cutting into Apple’s high-end market, where they traditionally made the most profit. Steve Jobs annonced Apple’s new corporat strategy on November 10, 1997. Through the years to come Appple would sell computers direct, both over the web and the phone, as Power Computing had done so well in the past. This strategy was fully implemented by 1999. In July 1999, the iBook was introduced. This computer brought style to the low-end portable market. Several months later, the PowerMac G4 was introduced, a new professional desktop machine. Apple’s stock had risen all summer, and by mid-September 1999 was trading at an all-time high, in the high 70s. In his Keynote at MacWorld Expo SF in January 2000, Steve Jobs unveiled Apple’s new Internet strategy: a suite of mac-only internet-based applications called “iTools” and an exclusive partnership with Earthlink as Apple’s recommended ISP. In July 2000, Apple announced a slew of new machines, including the PowerMac G4 Cube, which added a fifth category to Apple’s four-corner product strategy.

January 6, 1999: At the Macworld Expo, Connectix releases the Virtual Game Station software for the Apple Macintosh computer, allowing users to play Sony PlayStation video games on their computers. Price is US$49.

April 22, 1999: In the US, Connectix ceases shipping its Virtual Game Station software for the Apple Macintosh computer, complying with a federal court order. Sony filed a trademark and patent infringement lawsuit against the company in January. The software allows Sony PlayStation games to be played on Apple computers.

May 16, 1999: The Fox Broadcasting Company airs The Simpsons TV show in the US. A cyber-cafe shows several color-cased computers, a reference to the Apple Computer iMac computers.

June 20, 1999: The TNT television network airs the film Pirates of Silicon Valley in the US. The film is about Steve Jobs and Bill Gates in the early days of the personal computer industry.

June 29, 1999: La Salle Gallery in San Francisco sells an original Apple I computer with user manual, keyboard, and cabinet, at auction for US$18,000.

July (?) 1999: Steve Jobs discusses with Ben Rosen, Chairman and interim CEO of Compaq at the time, for the world’s then-largest Wintel PC manufacturer to license Mac OS which would have been a coup for Apple. No agreement will be reached, as Apple had second thoughts about licensing its “crown jewel”, while Compaq did not want to offend Microsoft whom they had partnered with since their founding in 1982. (Ben Rosen admitted later than by 2007 he had switched to being a Mac user).

July 22, 1999: At the Macworld trade show, Apple Computer introduces the AirPort wireless networking system, based on the IEEE 802.11b standard.

August 19, 1999: Apple Computer files a complaint against eMachines for copying the look of the iMac with the eOne computers.

September 3, 1999: In Iowa, Microware Systems files a lawsuit in U.S. District Court against Apple Computer, claiming trademark violation by Apple of Microware’s “OS-9” operating system. Microware seeks Apple’s earnings from the sale of Mac OS 9, and an order refraining Apple from using the name in advertising. (The Court dismissess the lawsuit in March.)

September 1999: Apple Computer begins shipping the iBook computer. Apple uses its strategy of differentiating the consumer versus professional product lines. Apple’s focus on design has allowed each of its subsequent products to create a distinctive identity. Apple avoided using the beige colors then pervading the PC industry. The company would later drift from the multicolored designs of the late 1990s and early-2001s. Apple used anodized aluminum; glass; and white, black, and clear polycarbonate plastics among their build materials. Today many PCs are more design-conscious than before the iMac’s introduction, with multi-shaded design schemes being common, and some desktops and laptops available in colorful, decorative patterns. Apple’s use of translucent, candy-colored plastics inspired similar designs in other consumer devices (e.g., kitchen countertop grilling machines; portable electronics; pencil sharpeners; and, video game consoles and peripherals (including the Nintendo 64, which was released in special edition ‘Funtastic’ colors). Apple’s later introduction of the iPod, iBook G3 (Dual USB), and iMac G4 (all featuring snowy-white plastic), will inspire similar designs in other company’s consumer electronics products. The color rollout also featured two distinctive ads: one called ‘Life Savers’ featured the Rolling Stones song “She’s a Rainbow” and an advertisement for the white version had the introduction of Cream’s “White Room” as its backing track. 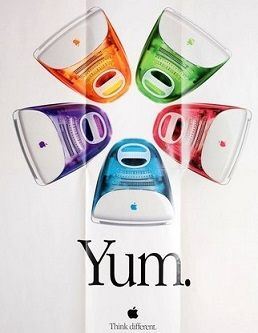