In July 1997, Apple announces the resignation of Gil Amelio, following another multi-million dollar quarterly loss. The time and place for the most ground breaking announcements, however, would be MacWorld Boston in August 1997. Jobs, who by now was being referred to as “interim CEO,” makes the keynote speech, and speaks of the company’s upcoming aggressive advertising campaign, upcoming new Macs, and Rhapsody. He announces an almost entirely new Board of Directors, including Larry Ellison, CEO of Oracle. But he saves the best for last. In a ground breaking decision, Jobs announces an alliance of Apple Computer with Microsoft. In 1997, Apple Computer Inc. creates a new advertising slogan: Think different. Indeed, it is not easy to think outside of the box, but it is worth trying. Much later, in an interview with Peter Burrows in Bloomberg Businessweek, in 2004, Steve Jobs will say: “We, Apple, do things where we feel we can make a significant contribution. That’s one of my other beliefs”.

At the Macworld Expo, Steven Jobs and Stephen Wozniak appear together on stage for the first time since 1984. Apple Computer announces it plans to release an operating system code-named Rhapsody in 1998 that will run current applications, Next OS applications, and Java applications. The new OS will feature preemptive multitasking and protected memory. Apple demonstrates a limited edition 20th anniversary Macintosh, featuring a flat-panel display, to be sold for US$9000.

February 4, 1997: Apple Computer’s acquisition of NeXT Software is complete. Total cost is $427 million.

February 1997: Apple Computer CEO Gilbert Amelio announces restructuring of the company to focus on the Mac OS and Macintosh hardware. Steve Jobs and Steve Wozniak will join the executive committee as advisers to Amelio.

February 1997: Apple Computer completes its acquisition of Next Software, for a total cost of US$430 million.

February 16, 1997: The Fox Broadcasting Company airs The Simpsons TV show episode, where in the title scene, an Apple Computer Macintosh-style window makes a parody of the America Online software, calling it America Onlink, with a very slow loading of artwork for the show’s family characters.

March 14, 1997: Apple Computer terminates 2700 of 11,000 full-time positions, and 1400 contract or temporary positions. The OpenDoc and Open Transport projects are dropped, as is the Performa brand name.

May 25, 1997: Apple Computer announces that it will make its Newton Systems Group a subsidiary company, to market the MessagePad 2000 and eMate 3000, with about 130 Apple employees.

May 27, 1997: Apple Computer and its Mac OS licensees agree to change Apple Computer’s Macintosh OS fee from about US$50 to US$150-350 per system, depending on processor speed.

April-June 1997: Market share of personal computer in the world for April to June: Apple Computer 3.8%.

July 9 1997: Apple announces the resignation of Gil Amelio as CEO, following another multi-million dollar quarterly loss. His severance package is about US$7.5 million. Ellen Hancock also resigns from Apple Computer.  These decisions came as a surprise to nearly everyone, and at this time a new CEO has yet to be announced. The Executive Board felt that Amelio had done all he could for Apple, and that while he had been responsible for a number of improvements at Apple, he could do no more. In the meantime Fred Anderson, Apple’s CFO, has been put in charge of day-to-day operation, and Steve Jobs was given an expanded role at Apple for the interim.

July 22, 1997: Apple announces Mac OS 8.0 and releases it on July 26, 1997 for US$99. Code-name during development was Tempo. 1.2 million copies will be shipped in the first two weeks, making it the most successful Apple software product ever.

July 1997: Steve Jobs decides to not take on the role of chairman (and CEO) of Apple Computer, preferring to remain as head of Pixar Animation Studios.

August 6, 1997: At the Macworld Expo, Steve Jobs and Bill Gates announce a five-year alliance of Apple Computer with Microsoft. Terms include: cross-licensing of existing patents plus new patents over the next five years, Microsoft will release Office for Macintosh over next five years, Apple will make Internet Explorer the default browser on all shipping Macintosh systems, Apple and Microsoft will collaborate on Java compatibility, Microsoft will invest US$150 million in Apple stock and hold it for at least three years. Jobs will join a revamped Apple board of directors with Larry Elison of Oracle added, and A.C. Markkula removed.

August 1997: Steve Jobs begins designing what will become the iMac.

August 1997: The US Department of Justice begins a review of Microsoft’s investment in Apple Computer (see August 6, 1997).

September 2, 1997: Apple announces its intention to buy out Power Computing’s MacOs licence, as Steve Jobs was sure that clone vendors such as Power Computing were cutting into Apple’s high-end market, where they traditionally made the most profit. Clones had failed to effectively expand the MacOS market, instead taking customers away from Apple. Apple also offered jobs to many of Power Computing engineering staff. Power went out of business several months later. Apple also bought out its MacOS licences from Motorola and IBM, but Umax was allowed to stay in the game, but with the tacit understanding that it would fill the low-end market, with machines selling for under $1000. Umax sold its remaining inventory of Macs, and became selling Wintel boxes. Apple Computer buys Power Computing’s Macintosh operating system license, customer database, and certain employees, for US$100 million in common stock and about $10 million for debts and closing costs. Power Computing will cease sales of Macintosh systems as of December 31.

September 8, 1997: Umax Computer announces that it has reached an agreement with Apple Computer for an extension on its license on the Mac OS 8 operating system. The license only covers Mac OS 8 until July 1998, and not on Common Hardware Reference Platform architecture machines.

September 9, 1997: Apple Computer announces it will not spin off its Newton Systems Group as it had announced in May.

September 11, 1997: Motorola Computer Group announces it is leaving the Macintosh systems market, due to inability to reach a viable business agreement with Apple Computer on licensing the Mac OS. Motorola also announces it will not ship StarMax 6000 systems previously announced.

July-September 1997: Market share of personal computers in the world for July to September: Apple Computer 3.3%.

November 4, 1997: Apple Computer announces a deal with CompUSA for a “store within a store” for Apple products in all 148 retail locations.

November 10, 1997: Steven Jobs announces further changes to Apple’s corporate strategy. Apple would now sell computers direct, both over the web and the phone, as Power Computing had done so well in the past.

January 27, 1998: Apple Computer shifts development and distribution of ClarisWorks from Claris back to Apple, and renames it AppleWorks. Claris is renamed FileMaker, with primary focus the FileMaker Pro software. 30 Claris employees are laid off.

January, 1998: At MacWorld San Francisco Jobs announces that Apple had, for the first time in more than a year, had a profitable quarter, to the tune of $44 Million. This far eclipsed analysts’ projections, and sent Apple’s stock back into the 20s.

February 1998: Sales of Apple Computer’s MacOS 8 to date: over 2 million. Apple Computer reduces the price of the 20th Anniversary Macintosh to US$3999 to sell out remaining units.

March 1998: Apple Computer and Microsoft announces they will merge their two Java implementations into one Mac OS Runtime for Java.

April 1998: Apple announces another profitable quarter – $57 Million, which comes as a big surprise to nearly everyone.

May 1997: Microsoft introduces the IntelliMouse Pro mouse. Price is US$70.

May 1998: Umax abandons the Macintosh-compatible market.

May 11, 1998: Apple Computer announces that 1 million copies of QuickTime 3.0 have been downloaded from its Web site.

July 1998 : Apple profits for the 3rd consecutive quarter, to the tune of $101 million. This helps to push Apple’s stock to several 52-week highs in just a few days.

September 30, 1997: Mac announces that unit sales of iMac systems during the first six weeks of availability are of 278,000. This is the fastest shipping Macintosh to date.

December 11, 1998: Warner Bros. Pictures releases the film You’ve Got Mail. The title is the phrase used by the America Online software, which is shown and used in the film. The icon for Microsoft Word appears on a computer desktop. An Apple Powerbook and an IBM laptop computer are used throughout the film.

December 1998: a 5th consecutive profitable quarter for Apple computer. The iMac was the best-selling computer in the nation for most of the fall. It drives Apple sales well beyond most predictions, with year-over-year growth, and a sleek new PowerMac G3.

WWDC 1997: Steve Jobs about Apple’s future. Video by Medien im Wandel, uploaded on October 19, 2011. Apple’s Worldwide Developers Conference (WWDC) in the San Jose Convention Center (May 13-16) was the first show after the purchase of NeXT, and focused on the efforts to use OpenStep as the foundation of the next Mac OS. 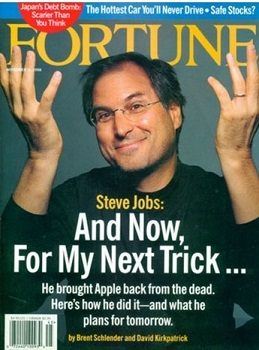