The iMac G3 or Original iMac was the first all-in-one legacy-free desktop computer by Apple. With its’ Bondi Blue plastic body the iMac G3 had a futuristic captivating look, but it’s innards are more interesting. It was the first personal computer lacking the floppy drive and all the legacy ports but USB. Even the keyboard and the mouse had an USB not a PS/2 connector. The iMac G3 had an inbuilt 15-inches 16-bit monitor with resolution of 1024 x 768, 56 kbps modem, in-built speakers. The headphones dual jacks were on the front of the machine while the peripheral ports were hidden on the right side of the computer behind the little door. The iMac G3 was originally available in one color: Bondi Blue. Later it was available in thirteen colors or flavors: Bondi Blue, Strawberry, Blueberry, Lime, Grape, Tangerine, Graphite, Ruby, Snow, Indigo, Sage, Blue Dalmatian, Flower Power. 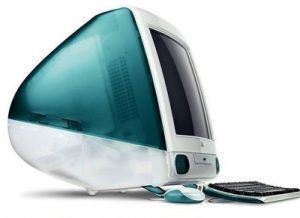