The iPad Air 3 (2019) was initially introduced on March 18, 2019. The Air 3 model appeared to be the first time since 2014 for Apple to have presented a new iPad Air. Powered by an Apple A12 Bionic processor, the iPad Air 3 is configured with 3GB of RAM, its other remarkable features including the dual cameras, advanced connectivity features and microphones paired with a set of stereo speakers. The pricing of the iPad Air 3 situates itself between the budget benchmark iPad (starting at $329), and the more upscale iPad Pro; the entry-level Wi-Fi – only 64 GB model sold at $499 against the 256 GB Wi-Fi and Cellular option at $779.

The iPad Air 3 presents an upgraded design in comparison to its iPad 9.7-inch predecessor, without, however, achieving the distinctive changes made to the Pro models. By shrinking the bezels around the device’s edge, and that way enabling a larger screen-to-body ratio, a bigger display is offered in the new iPad. The 2019 Air model retails the Home button, unlike the 2018 Pro models, and abandons the newer Face ID in favor of the trusted Touch ID. The iPad Air 3 is also configured with the headphone port.

A difference setting the newly presented iPad Air 3 from its often compared-to iPad 9.7’ is the comeback of the laminated screen. In favor of cost reduction, the 2017 and 2018 iPad models chose to disregard this feature. 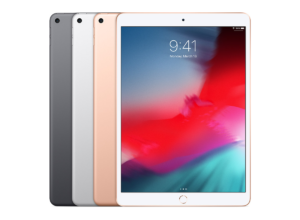