The long awaited update on Apple’s iPad mini series was first introduced on March 18, 2019. With the device’s predecessor having come out as far back as 2015, surprisingly enough, the exterior of the new model remained almost identical to its 4th generation sibling. With the exception of screen size, the iPad mini 5 (2019) appears to be of extreme similarity to the released alongside it 10.5-inch iPad Air. Its 2048 x 1536 display makes the latest iPad mini Apple’s smallest tablet to date. The newest iPad mini remains the Touch ID Home button together with the headphone jack, still charging via Lightning, unlike the newest iPad Pro models requiring USB-C.

Despite the definite exterior similarities, the iPad mini 5 (2019) undoubtedly offers a better display paired with improvingly fast internals than its predecessors. Such improvements include, for instance, innovative display technology like True Tone, wide color support, and a 25% brighter display.

Presented in the usual range of Black and Space Gray, White and Silver, and White and Gold cases, the iPad mini comes equipped with either 64 GB or 256 GB of flash memory. As is the case with the previous iPad mini models, the customer is offered a choice of the device providing either Wi-Fi only or Wi-Fi and Cellular connectivity options.

As claimed by Apple, the 2019 model can be expected to provide “three times the performance and nine times faster graphics” than the previous 2015 4th generation iPad mini. 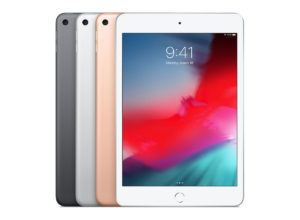