The iPad 6th Generation was introduced on the 27th of March 2018. The new model has since frequently been described as having combined multiple internal features of the iPhone 7 and certain elements of design similar to those of the 5th generation iPad it had replaced. The 2018 model is the first of the iPads to be a non-Pro model configured to support the Apple Pencil. Since its original release, the iPad has been marketed with a specific emphasis on the educational sector, offering a discounted price for schools, teachers, and students. Unlike its Pro equivalent, the iPad’s display is not fully laminated and does not have an antireflective coating. The iPad is available in its usual Wi-Fi – only and Wi-Fi and Cellular versions.

The iPad 6th Generation (2018) model is claimed to be faster and offering more LTE bands than its predecessor. Featuring the same chipset as the iPhone 7 and the iPhone 7 Plus, the iPad is, however, configured with a speedier A10 processor.

The new iPad offers two speakers as compared to the four you get with an iPad Pro, and its dual cameras are noted among its prominent features. As stated by many of the device’ s reviewers, the iPad lacks the Pro’s promotion technology; a feature making the Pro version of the iPad more suitable and ideal for the use by professional artists.

As mentioned previously, the iPad does not have a fully laminated display, providing a gap between the glass and the LCD, that way making the display harder to see in direct sunlight.

Video published by DetroitBORG on March 30, 2018 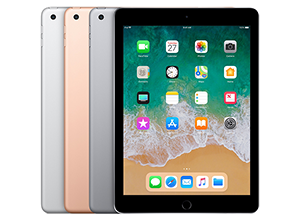