Since the sensational iPhone X was introduced, Apple has followed an ambiguous path by removing the HOME button in the design, which was a unique technical solution of the company’s phones and tablets through the years. Millions of people used to “communicate” with their beloved device a lot during the day, and therefore got used to using the phone a certain way.

That is why the lack of the HOME button on the iPhone X became the most controversial subject within Apple’s community. In fact, Apple always been focused on gesture-control with the products, as we could mention on an iPad. Software engineers used to develop and introduce new gestures with the next iPad-built iOS update. But, while this feature is obvious and clear for the iPad’s screen size – it is uncertain for smartphones. A lot of Apple’s fans expressed dissatisfaction due to the “no button” design because it changed the whole phone so abruptly. As customers and consumers we are just expected to adapt to this change and accept it. I can assure you we will one day see a button-less iPad as well.

We want to share some tips and tricks with you about the new iPhone. The iPhone X happens to be the easiest iPhone to use yet. Let’s get started.

1. Hard Reset – sometimes force rebooting is necessary and the only way to return a “frozen” iPhone back to the correct state. To perform this on previous iPhones we have to press and hold the POWER button and the HOME button simultaneously, until the screen would go off and the Apple logo would appear. iPhone X can also perform this operation. To hard reset on the iPhone X, you have to press and release the VOLUME UP button, then press and release the VOLUME DOWN button and finally press and hold the POWER button until the Apple logo appears.

2. Screen Wake – sometimes in a hurry we need to activate the screen without unlocking the iPhone to see if there are any new notifications or missed calls with messages. Before now, we used to press the HOME button or the POWER button to make this happen, or just pick up the phone and use the “Raise to Wake” feature, that appeared with the iPhone 6s and iPhone SE. On the iPhone X you still can simply press the POWER button to do this, but there is a much easier way, just tap the screen once and it will wake up. It is literally that simple.

3. Unlocking and Returning to Home Screen – this is what used to happen when we used to press the HOME button on previous iPhones. For the iPhone X a team of dedicated software engineers invented a new gesture, to just swipe up from the bottom edge of the screen.

4. Multitasking menu (Recent Used Apps) – in the past we had to double-press the HOME button to reach this on iPhones without 3D touch. Now we have to use the same gesture as we did to return to the Home screen. All you have to do is swipe up from the bottom edge of the screen, but leave your finger on the screen for a moment. The next video will demonstrate 3D touch features on the iPhone X:

5. Fast switching between applications – earlier, when 3D touch technology was introduced, the current feature was discovered on the iPhone 6s by forcing swipe (a swipe with more downforce at the start) from the left edge of the screen. The multitasking menu is also available by forcing tap and holding the same left edge of the screen. The tenth iPhone generation revealed an iOS build where this feature disappeared, but the Apple team promised to return it back with the next iOS 11.x.x updates. Anyway, there is a tiny trick that any iPhone X owner will adore. Have you noticed a small interface element at the bottom of the screen when an application is launched (meaning you are not on the Home screen)? It looks like a kind of indicator (black horizontal line) and some people call it the “HOME indicator”: 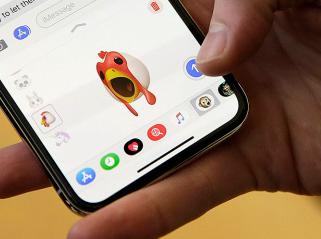 By swiping this indicator left or right, you can move between recently opened applications. This truly allows users to work with Mail+Reminders+Numbers or Videos+iMovie+iMessage way quicker and more efficiently. Phil Schiller has become a “sharpshooter” when he said it is the easiest and the most comfortable way to work with several applications simultaneously. 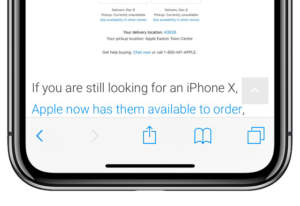 another HOME indicator, now in Safari

7. Powering off the iPhone – holding just the POWER button is now used for Siri as we mentioned above, so to turn the iPhone X off, you need to press and hold the POWER button and any of the VOLUME buttons (UP or DOWN) at once, until the “Slide to power off” and “SOS” indicator appears.

8. Apple Pay – to confirm a transaction using the Apple Pay technology just press the POWER button twice and look at the screen.

9. Search – nothing has changed here, the “Search” bar is still available via the single up-to-down swipe on the center of the screen.

10. Control Center – useful set of tools is now available by swiping down from the right top corner of the screen (the battery indicator). Also, while the iPhone X interface doesn’t support percents of battery on the home screen anymore, you may still reach precise indication with percents on the Control Center screen. 3D touch is also present here and you will get additional and expanded tools by forcing tap on the tool blocks.

12. Reachability – this software-realized feature first appeared with the 4.7 inch (iPhone 6) and 5.5 inch (iPhone 6 Plus) displays. It makes use of the iPhone with just one hand much easier. It is turned off in the settings menu by default on all iPhone generations – the X model also have the ability to move the screen down. You need to pull down on the HOME indicator that we described in the Fast App Switching section. It is a bit hard to execute for everyone right now, but we sure it will be fixed in forthcoming iOS updates.

13. Taking a screenshot – the iPhone X also requires pressing two buttons at the same time, but now it’s the POWER button + the VOLUME UP button.

14. DFU mode (Device Firmware Upgrade) – rarely we can suffer major software errors that always performed as “The Cable and the iTunes icon” on the black background screen. Once happened, we have to connect the iPhone to the computer in ability to recover it with the help of iTunes. 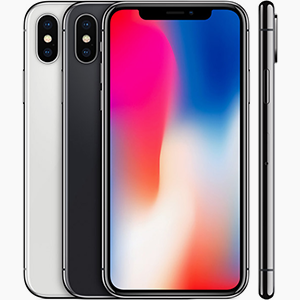