From the beginning with the first generation of the iPhone back in 2007, until present day with the ultra-modern iPhone 7 Plus, Apple strictly followed same hardware unit architecture and layout of components inside the housing case. It is childishly simple, a box-like housing body, which filled up with all the components and finally closed from the top with the display. It is a very simple and the best hardware layout solution at the same time. For example, it allows one to change a broken screen to a new one in just several minutes.

iPhone 4/4S – Details of the Most Reliable iPhones Ever

You don’t have to disassemble the phone fully and this fact covers all iPhone generations. All, but not the iPhone 4/4S.

Generally, these two models hold up a unique place in Apple’s history. The iPhone 4 made a revolution in human minds with a multi-touch feature and showeв the whole world what “a smartphone” should really be. All of Steve Job’s efforts and concentration was directed towards the iPhone 4. He used to control almost every step and part of the iPhone creation and made all the design features by himself, with only advice of Jonny Ive. Interestingly, iPhone 4 and iPhone 4S are considered to be the most reliable and authentic models among Apple’s fans, as well as the last devices to be with “the hand “of Steve Jobs.

In this article we would like to tell you about the hardware construction of these two models, main differences in layout and, probably the most exciting, why those differences took place?

The crucial difference between the iPhone 4/4S and any other iPhone generation is the way you disassemble the phone: only here you will start from the back. All inboard components and units put on the strong metal framing, which is the GSM/3G/Wi-Fi antenna of the phone simultaneously and in the end of teardown you will get screen module as the front panel. This construction is complex, more difficult to repair and inefficient. Mainly, screen replacement now became more difficult and takes way more time because you have to disassemble the iPhone fully to get the broken front panel out. As an example for the article, we took an iPhone 4 for screen replacement. By the way, always remove SIM-card holders before we do any disassembling. Now, let’s get in to the screen…

Step 2. Remove battery-to-board screw and the small ground clip, then lift out the battery. Generally, we recommend further dismantlement exactly with the battery screw because we need to break the current ring and remove the battery for easy access later. This screw secures the battery connector to the logic board and it also holds a tiny detail. The small metal clip carries out two important functions: a ground to the rear panel and a shield protector for the GSM-coax. cable that comes from the speaker module (third big element, as we mentioned earlier). A coaxial cable connects the logic board near the battery connection place. Sometimes, private repair shops manage to lose or skip this during reassembly, because lacking it won’t cause any issues for your phone You still can catch immediate “No Service“ if you drop your iPhone once in a while. It happens when the GSM-coax. cable comes apart from the motherboard due to a drop – that’s why it is important to put this small clip back on when reassembling. “No service“ after dropping was a very common issue for the iPhone 4 back in 2010-2012, and almost every private repair shop offered an expensive solution to the customer, due to the necessity to change the speaker that performs cellular antenna. It’s clear that nobody ever replaced the whole speaker to fix the problem when you just need to connect the cable back to the board. As you might already have noticed, the iPhone 4s has this same important detail as well, but it is placed near the top of battery connector, which now is held up with the 2 screws instead of 1. Coaxial cellular cable connecting place also moved to the top.

Step 3. Remove the logic board.

3.1. Remove the 5 screws securing the Wi-Fi amplifier plate and remove the plate as well. After removing this detail, we get access to the rear camera replacement on both iPhone models. Crucial function of this metal plate on both generations is to secure flex cable connections for the LCD (display data), digitizer, front camera, headphone jack with volume buttons and a power button. The position of the counted flex cables on the logic board are also a bit different on both devices, but it isn’t influential at all. The plate itself has minor differences in construction on the iPhone 4s. It held up by 4 screws and no longer a wi-fi amplifier. The fifth screw stands separately and holds a grounding clip, which also protects the coax-cable connection of the Wi-Fi antenna (just like the cellular coaxial cable near the battery).

3.3. Remove the remaining screws that hold the logic board: a barrel-screw at the top, a “white” screw in the middle and a screw on the bottom corner of the logic board. Now we can remove the motherboard out of the phone. Similar with the iPhone 4s, but it has 2 more screws holding the logic board. One of them is hidden underneath the rear camera and covered with black tape, another one is a “barrel“ screw and placed near the battery connector. This screw is part of a 2 screw connection type of the battery, because the “barrel“ screw itself assumes a sitting place for the normal screw later.

Step 4. Remove the speaker screws and remove the speaker itself. In the iPhone 4 there is a single screw on the right side which holds the speaker and another screw on the left that we removed earlier with the logic board (a common single screw for logic board and speaker). In the iPhone 4s we have 2 screws, a separate one (with a tiny black triangle) on the left and a typical on the right. Probably, this is the most benefit from Apple engineers as well — to make separate screws for the speaker and the board. The reason is due to issues that Apple experienced with the older iPhone 4 model, where the speaker with a cellular antenna was weak and needed replacement. The second crucial problem with the iPhone 4 (and iPhone 4s later) was a dock connector flex cable, that was placed underneath the speaker. It causes several annoying problems: no charging, errors during syncing with iTunes and even no sound. The iPhone often “thought“ that it connected to an audio speaker with its 30-pin dock, so all sounds were directed by iOS to the imaginable external speakers. So, due to the new speaker construction in the iPhone 4s — replacement of the speaker and 30-pin dock flex cable no longer required to remove the logic board prior. It became possible after removing the rear panel.

Step 6. Remove the screws that hold the display module, a single detail for the touch digitizer and LCD-screen. There will be TEN screws… that’s right TEN! There will be 4 at each corner of the frame and 6 along the body (3 on both the left and right sides). This is the strongest Apple engineers have ever performed.

Step 7. Remove the display module. Here you can see the Home button, that is part of the screen on the iPhone 4s. On the iPhone 4 the button in not protected by rubber and is a part of the flex cable. Construction wise, it is all the same, but in the iPhone 4s protection of the button makes it impossible for water and dust to cause damage from that place.

Now, we have at least reached the target.

The official video of the brand new Apple iPhone that was revealed on June 7, 2010. 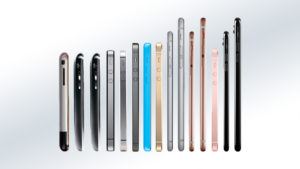