The iPod shuffle 2nd gen is titled as the most wearable iPod ever and the smallest MP3 player in the world, which it undoubtedly was back then. The sole 1 Gb model in an aluminum case is half the size of the previous model and the size of the Apple Remote Control. It has a built-in clip for comfortable wear. The control buttons (power\shuffle\not shuffle) are separated to avoid an accidental clicking. As for the software, the iPod shuffle 2nd gen is formatted in FAT32 and can’t support Apple Lossless playback due to low processing power. The device also lost the USB stick and the connectivity is provided via a headphone jack-USB piece of hardware to charge and load.

To connect iPod shuffle to your computer proceed as follows:

How to Disconnect iPod Shuffle

Remove iPod shuffle from the doc.

With iPod shuffle, you can take your music collection with you wherever you go. Read this chapter to learn about loading music and listening to iPod shuffle. You use iPod shuffle by importing songs, audiobooks, and podcasts (radio-style audio shows) to your computer and then loading them onto iPod shuffle. Among the possible options you can find the following:

How to Import Music into Your iTunes Library on Your Computer

How to Load Music onto iPod Shuffle 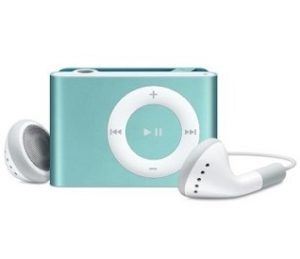