The iPod touch 2nd gen mimics iPhone 3G with its chromed steel back and rounded corners but lacks cellular mode, A-GPS and in-built camera. It’s thicker but lighter than the iPod touch 1st gen and sports a silver front trim. The player shares the same multi-touch 3.5 screen with 320 x 480 resolution, an accelerometer to automatically adjust the screen either in portrait or in landscape mode, a light sensor to tweak screen brightness and an integrated Wi-Fi (802.11b/g) module. An external volume control and an integrated speaker have been added to the device, but the microphone is built in the Apple Earphones with Remote and Mic. The battery life was enhanced up to 36 hours of music playback and 6 hours of video playback.  The iPod touch 2nd gen shares the OS with the iPhone and has a lot of iPhone features and apps in a bundle: Safari web browser, YouTube, calendar, contacts, clock, calculator, email, stocks, notes and weather as well as telltale iPod features: Genius playlists maker and a shake-to- “shuffle” function plus Nike+ Kit support. Keep in mind though, that iPod 2nd gen lacks the GSM module and is not capable of geo position when off wi-fi network.

How to Restart and Reset iPod Touch

If something isn’t working right, you can try restarting, force quitting an application, or resetting iPod touch. To restart iPod touch:

If you can’t turn off iPod touch or if the problem continues, you may need to reset. A reset should be done only if turning iPod touch off and on doesn’t resolve the problem.

To reset iPod touch: Press and hold the Sleep/Wake button and the Home button at the same time for at least ten seconds, until the Apple logo appears.

How to Watch Rented Movies

The movie must be fully downloaded before you can start watching. You can pause a download and resume it later. Rented movies expire after a certain number of days, and once you start a movie you have a limited amount of time to finish watching it.

The time remaining appears near a movie’s title. Movies are automatically deleted when they expire. Check the iTunes Store for the expiration time before renting a movie.

To view a rented movie: Choose Videos and select a movie.

How to Watching Videos on a TV

You can connect iPod touch to your TV and watch your videos on the large screen. Use the Apple Component AV Cable, Apple Composite AV Cable, or other authorized iPod touch compatible cable. You can also use these cables with the Apple Universal Dock to connect iPod touch to your TV. (The Apple Universal Dock includes a remote that lets you control playback from a distance.) Apple cables and docks are available for purchase separately in many countries.

To Delete Videos from iPod Touch

You can delete videos from iPod touch to save space.

Important note: If you delete a rented movie from iPod touch, it’s deleted permanently and cannot be transferred back to your computer. 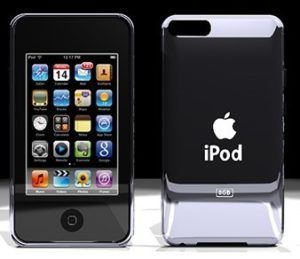