Apple iPad mini 4 computer tablet was casually described by Apple as a little iPad Air 2, as its pack is similar, though their internal components are something different. The iPad mini 4 is the first major redesign of the iPad mini line, with a slightly taller and wider body compared to the iPad mini 2 and mini 3. The iPad mini 4 features the Apple A8 and the Apple M8 motion co-processor. Two iPad mini 4 models were designed by Apple: the Wi-Fi only model and a cellular-equipped model. According to Apple, itw CPU is 1.3 times faster, and its graphics performance is 1.6 times faster than those of the mini 2. Their other specifications, not related to this details, are identical.

Compared to the previous versions of the iPad mini line, the iPad mini 4 has a better screen, better camera, faster processor and a Touch ID fingerprint sensor. This model can also handle split-screen apps, which can come in handy for checking email or Twitter while working. 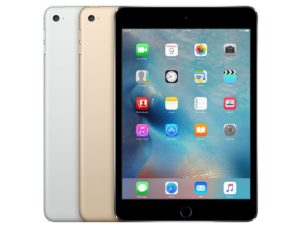