Being the series of the most powerful computers fabricated by Apple, Mac Pro is a workstation and server computers line for professionals who need the workstation-level power, speed and performance. In fact, Apple is known for its design features, and the Mac Pro line is no exception. The Mac Pro is also the most upgradable Mac, offering a high level of internal access. Its internal structure makes adding and replacing components easy.

Note than unless you have a specific requirement for high-end features, such as RAID to perform Mac OS X Server functions, video edition, 3-D graphic design, scientific research and so on, you shouldn’t consider buying Mac Pro, and go to Apple’s consumer models, instead.

The first generation of Mac Pro was announced on August 7, 2006 at the annual Apple Worldwide Developers Conference, and the second generation of Mac Pro, completely redesigned, was presented in 2013. In fact, the Mac Pro line replaced previous Apple’s flagship Power Macintosh (later Power Mac) family series, one of the best personal computers of the nineties (Apple Computer manufactured and sold Macintosh from March 1994 to August 2006, and it was Apple’s first computer to use a PowerPC processor. It was discontinued when Apple decided to use Intel processors, making way for its the Mac Pro).

Note that the 2010 and later Mac Pro systems were available with one or two central processing units (CPU) with options giving four, six, eight or twelve cores. The eight core standard configuration Mac Pro uses two Quad core ×8 Intel E5620 Xeon CPUs at 2.4 GHz. It could be configured with two Hexa Core Intel Xeon X5670 CPUs at 2.93 GHz. Since the CPUs are socketed, the CPUs can be removed and replaced with compatible 64-bit Intel Xeon CPUs.

Curiously enough, from 2006 through 2012, the Mac Pro family had an aluminum case, and its exterior was similar to that of the Power Mac G5. There was however an exception, as Apple added a few features, such as an additional optical drive bay, one less exhaust vent on the back of the device and a new arrangement of I/O ports on both the front and the back of the computer. Users could open the case by operating a single lever on the back. This lever unlocked one of the two sides of the Mac Pro, and the drive bays. User could access the expansion slots for memory, PCIe cards and drives be removing the side panel without any tools (no tools were required neither for installation.

Apple also reduced significantly the size of the internal cooling devices thank to the Mac Pro’s Xeon processors, as they generated much less heat than the dual-core G5s used in previous models. As a consequence, the Apple’s designers re-arranged the interior space – more room was now available at the top of the case and the number of internal drive bays was doubled. The reduction of the size of the cooling devices also led to elimination of the plastic air deflector used as part of the cooling system in the Power Mac G5 models. As less heat was produced, it also meant that less air was expelled out of the case for cooling during normal operations, and the first Mac Pro resulted to be very quiet in normal operation – much quieter than the much noisier Power Mac G5! (Because of the new cooling air intake configuration of the front of the Mac Pro case, Macintosh enthusiasts referred to the Mac Pro 1st generation line as the “cheese grater Mac Pro”.

History of the Mac Pro [Video] 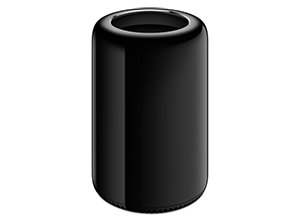