There is more to macOS Sierra than just a new name. All the changes can be divided into three groups: interface and features of the OS, its integration with other Apple devices, and the file system. Let’s have a look at some of them..

macOS Sierra now has Siri. You can access Siri via Dock, keyboard shortcut, menu bar icon, launch it manually from the apps folder, or use Spotlight to find and wake up your digital assistant. Siri’s search results can be pinned in the Notification Center and then dragged-and-dropped from there into Desktop or any other app. You can ask Siri to search the Web to find answers to your questions. What’s more, you can ask Siri questions about your system, such as how much disk space you have left. You can also ask Siri to turn on Bluetooth, Wi-Fi, or change the screen brightness. Yet, some system features are beyond Siri’s reach because of security requirements. Siri can’t activate FileVault, for example.

macOS Sierra brings the use of tabs into document-based first or third-party applications like Pages, Word, Photoshop, Maps, and Finder.

The picture-in-picture feature allows you to play videos outside of Safari and iTunes in an overlay that floats over your desktops and apps. You can drag it around and change the dimensions of the overlay.

You can now optimize your storage space as well. The Storage tab in System Information shows what space your apps occupy and allows you to delete files or store them in iCloud. Your storage options are enhanced tremendously from the previous OS.

The best feature about the macOS Sierra is the universal clipboard shared with iOS devices. You can copy a picture or a document on your Mac and paste in on your iPad or iPhone. The Desktop and Document folders are synchronized with iCloud and other Apple devices automatically, and old versions can be deleted.

iTunes can show lyrics and you can sing along.

Integration with Other Devices.

The core change lies in file system. Apple is going to switch from HFS+ to Apple File System (APFS). APFS has been developed with flash and solid drives in mind to meet growing demands for encryption, security, and reliability on desktop systems, as well as in on-line and cloud services.

What does it mean for end-users? macOS Sierra doesn’t run on APFS yet, you can just create an APFS disk image and copy files to and from it. This new file system opens the door for great possibilities. First, you can instant clone files and folders, which is good for cloud saving. Second, APFS time-stamps files with one-nanosecond precision, so that your backups will be as precise as possible. Third, APFS encrypts disks and files with separate keys, one for the file and one for its metadata. With double encryption it will be even harder to hack your files. Fourth, APFS neatly arranges files on the drive, taking care of sparse files, which don’t take up all the space allocated to them. Fifth, APFS disks can borrow free space from each other.

So, what are the drawbacks of macOS Sierra? It isn’t supported on iMacs, Macs and MacBooks older than late 2009, but there are some ways around that. 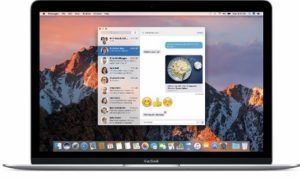