The iPod nano 6th gen has been changed radically in design and technologies. In shape it looks more like an iPod shuffle down to the clip, but preserved the aluminum and glass case of its predecessor. The same goes for a built-in integrated pedometer and FM radio with “live pause” feature as well as Nike+iPod, VoiceOver, and “Shake to Shuffle” functions. The smallest touch-controlled iPod ever has a 1.54″ color TFT display (240 x 240, 220 ppi), supports a multitouch interface on an iOS-inspired operating system but obviously cannot run either iOS applications or games compatible with previous iPod model. Equally, a microphone, a speaker, or a camera doesn’t fit in this really small iPod nano. The fully charged iPod nano 6th gen supports 24 hours of music playback (this iPod can’t play video). It is available in two capacities (8GB and 16 GB) and seven colors each: silver, graphite, blue, green, orange, pink and (PRODUCT) RED Special Edition.

To Get Information about iPod Nano

You can get these details about your iPod nano in Settings:

To get information about iPod nano: On the Home screen, tap Settings, and then tap About.

To Connect and Disconnect iPod Nano

iPod Nano 6th has an internal, non–user-replaceable battery. For best results, the first time you use iPod nano, let it charge for about three hours or until the battery icon shows that the battery is fully charged. The iPod nano battery is 80-percent charged in about one and a half hours, and fully charged in about three hours. If you charge iPod nano while adding files, playing music, listening to the radio, or viewing a slideshow, it might take longer. 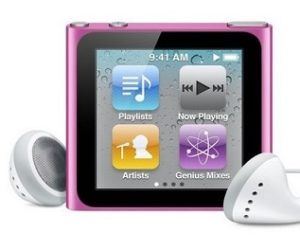