With public being a bit disappointed with the third generation design, Apple engineers improved the iPod nano 4th gen greatly. They’ve given it an aluminum and glass wraparound case as well as the portrait-oriented 2-inch color LCD display with a blue-white LED backlight. The iPod nano 4th gen is slimmer and thinner than its’ predecessor. The battery life for video playback has slimmed down as well from 5 to 4 hours without recharge, while the life span for music playback remains the same – 24 hours. There are two capacities of the iPod nano 4th gen, the 8GB model and the 16 GB one and both are available in nine colors: silver, black, blue, orange, purple, yellow, green, pink and (PRODUCT) RED Special Edition. Among other amazing features the iPod nano 4th gen gets a built-in accelerometer. First, it helps to orientate the screen in a landscape position (some games can be played in this screen position only) and starts the CoverFlow function at that. Second, a gentle shake shuffles the songs. The Genius software function to make a playlists of songs which are most likely to go together has been also improved. The software enhancement is inspired by MacOS X Leopard and technically developed on base of the iPhone OS X, but includes larger text and spoken menu items. As for games, Maze has replaced iQuiz, but Vortex and Klondike remains. 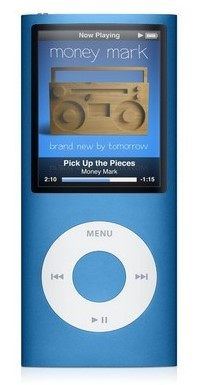