Your iPhone’s sleek operating system, iOS, makes the incredible computing power hidden in the device easy to use. However, any system can be vulnerable to external attacks, so Apple introduced a sequence of characters that the user must type each time they unlock the iPhone from the lock screen. This sequence is called a passcode, and it prevents any unauthorized access to the device. To protect their iPhones, users can choose between a simple or complex passcode.

Simple or Complex Passcode for Your iPhone or iPad

When your iPhone demands the passcode, the Enter Passcode screen indicates whether the device is using a simple passcode, or a complex passcode. In fact, choosing between the two can be a tough decision. Users need to thoroughly balance security with their needs, to be able to unlock their smartphone without flailing in frustration at the display.

Obviously, a complex passcode can provide much greater security than a simple passcode.

A simple passcode is a code that uses four digits, which is the default set by Apple. To enter it, the phone displays four boxes and a numeric keypad when you turn on the device.

A complex passcode uses a variable number of characters. It can incorporate a mix of letters, digits, and special characters (symbols, comic-book expletives, etc.). It provides much greater security than a simple passcode, as it is longer, consists of multiple types of characters, and is thus harder to crack. Including all types of characters greatly increases the strength of the passcode.

For a complex passcode, the Enter Passcode screen will display the text box and the classic QWERTY keyboard.

When deciding which type of passcode to use, you should keep these points in mind:

Warning: Your iPhone has Siri, your very own personal digital assistant, built-in, ready to respond to the commands you speak. Siri is a very useful feature, but do not let Siri bypass the lock screen. If you do, anyone who can speak intelligibly to your iPhone can take a wide range of actions on your behalf, even to place phone calls or send messages. Because of this potential for abuse, always turn Siri off if you apply a passcode for your device.

(2022) Forgot Your iPhone Passcode? Here’s How You Can Regain Access – NO COMPUTER!! [Video]

Video uploaded by Daniel About Tech on January 8, 2022. 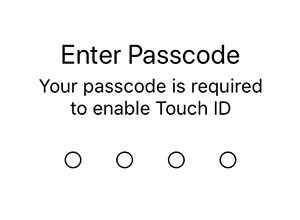