The iPhone 8 Plus is the top model of the iPhone 8 family. It’s taller and broader than the iPhone 8 and features greater resolution. It also has a larger battery. Other than that, both models are identical in both hardware and software.

The iPhone 8 Plus is also made exclusively of durable glass in the front and back. The only metal detail is the edge band made of aerospace-grade aluminum and reinforced with steel. The iPhone 8 Plus is engineered to endure dust and water (but not full water immersion) and qualifies a rating of IP67 under the IEC standard 60529.

The iPhone 8 Plus is powered by a 64-bit “Apple A11 Bionic” processor. Apple A11 Bionic is the latest chipset by Apple and its’ six cores feature a 2+4 arrangement: two Monsoon performance cores and four Mistral high-efficiency ones for graphic support. As the top model, the iPhone 8 Plus features 3 GB of RAM. The internal flash storage is the same as in the iPhone 8: 64 GB or 256 GB. The communication standards include 802.11ac Wi-Fi with MIMO, Bluetooth 5.0, LTE (4G), and NFC for Apple Pay.

The iPhone 8 Plus features a 5.5-inch widescreen multitouch IPS display called “Retina HD”. Its highlights are the “True Tone” and the 1080 x 1920 native resolution.

The iPhone 8 Plus doesn’t feature the Face ID. Its’ primary ID is the fingerprint scanner installed into the Home button that is now made ‘clickless’.

The estimated audio playback time for iPhone 8 Plus is up to 60 hours while that of the talk is 21 hours. Browsing will last for 13 hours while wireless video playback will last for 14 hours. The glass back panel allows to charge the battery wirelessly using a charging Qi standard mat.

iPhone 8 vs 8 Plus Unboxing & Comparison! [Video] 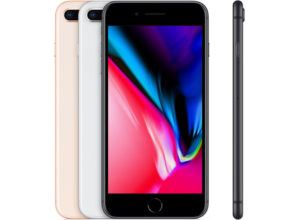