An additional display for a laptop is not a must-have for most chores, but every now and then, additional screen space makes multitasking much easier. For example, you can edit videos and check e-mails at the same time, or display some service technical info for reference while overclocking or coding. If you have a standalone display, then the task is simple: you just plug in your second monitor and go ahead. But, if your only other option is a tablet, having a second display can be a tricky thing to set up. The most popular interface for tethering both devices is Wi-Fi. But, the wireless connection is unstable at the very least, and the interchange between the windows on the two screens can be slow. The wired connection is much more reliable and developing the relevant iOS app was just a question of time. And a team of ex-Apple engineers now offers Duet Display, a nice app to tether your iPad to a MacBook Pro.

You just need a Lightning socket or a 30-pin dock connector and a stand to prop your iPad against it. You don’t even need Bluetooth or Wi-Fi, just an old good robust wire to drag and drop videos, texts and programs around on both displays. Once installed, Duet Display downloads a video driver. After restarting your Mac, you’re ready to go! Now, you can enjoy two displays, one of which Apple is so reluctant to install on the Macs. In a way, it can stand in for a highly praised Touch Bar. You can play with image controls or change your windows’ size with just a pinch. The windows move between the displays smoothly. Drag and drop the windows, the video files, the icons with your touchpad or finger, and they will appear exactly where you want them to. Finder’s contextual menu is brought up with a two-finger tap.

Duet Display menu bar suggests two parameters: video rate and screen quality. You have to pick from two options each – 30 \ 60 frames per second rate and normal display \ Retina display. If you pick the higher value, keep in mind that the app is a devil for CPU. It loads the processor too much and can start to lag. If you are sensitive to your CPU temperature and load, use Duet Display with care and do not overdo it. The app is also power-consuming. Make sure your MacBook and iPad are fully charged or plugged into the power source while using.

Having your system set up like this kills the very idea of portability, because you are chained to the desk, as well as the power line. But, when extra screen space or touch options are needed, this app is just the answer. A tablet or an iPhone occupies less space than the second monitor as well. Duet Display usage is not limited to Apple products only. With Duet Display, you can tether your MacBook and iPad, a MacBook and an iPhone or a Windows-based laptop and an iPad \ iPhone. Unfortunately, Duet Display will not work with a Windows-based laptop + an Android portable.

Finally, let’s quote Macworld.com, about Duet Display, a reputable source which usually is very well informed (and we quote): “Laptop users who occasionally need more screen real estate can benefit from an additional display.” And there are quite a few iOS apps (with companion Mac apps) that let you use an iOS device as that display. But, up to this point, what they lack is speed due to the slow Wi-Fi signal that allows the two devices to communicate. A team of ex-Apple employees address this issue with Duet Display, an iOS app that works in conjunction with a Mac app and a wired connection between your Mac and iPad. Try to play a Web video on the iOS screen, for instance, and the experience is choppy at best… Duet Display has the speed you desire. Unlike its competitors, Duet Display works only over a wired (30-pin dock connector or Lightning) connection.”

When you first launch Duet Display, it installs a video driver, which requires a restart of the host Mac. (Uninstalling the app is a painless option, available directly from Duet Display’s menu bar icon, that doesn’t require another restart.) The combination of the custom video driver and wired connection means blazing fast speed for your iOS “monitor.” 30 or 60 frames per second fast. The Web video plays smoothly, and keeps playing while you drag the window around. You can use touch to interact, if you wish—just drag via a finger or bring up Finder’s contextual menu with a two-finger tap. Duet Display offers only two options (via its menu bar interface) for your iOS display: the frame rate (30fps and 60fps) and, if applicable, retina or “normal” display modes. In retina mode, the display is crisp and sharp (…) When set to display in retina mode (at 60fps), the CPU usage on my 13-inch Retina MacBook Pro with attached retina iPad mini exceeds 120 percent. With this much CPU going to the extra display, I noticed some lag when switching between apps and launching new programs. 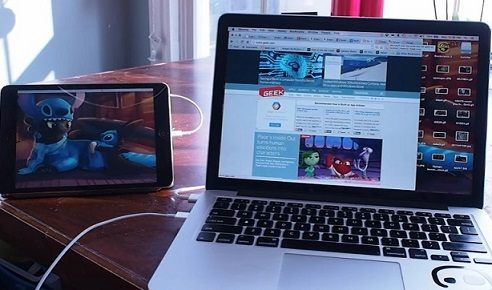 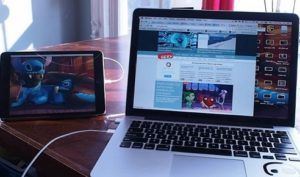