But by the mid nineties Apple were overpriced, and the majority of its products consisted of rehashes of the 1984 Macintosh with different improvements. Many competing products beat the Macintosh in performance, and their prices were much better. The company lost money in 1994, and 1995, 1996, 1997 followed suit . Even more, in the first quarter of 1997 Apple stock hit a 12-year low of $4 and the company reported a $708 million loss, and Microsoft (!) invested $150 million to save its competitor from disaster.

January 1993: At the Winter Consumer Electronics Show. Apple Computer shows off the first version of its Newton Personal Digital Assistants and the StyleWriter II printer.

January 14, 1993: The Fox Broadcasting Company airs The Simpsons TV show. A computer looking very much like a 1984 Apple Macintosh can be seen on the screen.

March 1993: Apple cancels project Tesseract, which was working on a RISC-based Macintosh. However the project Cognac continues, which is working on an alternative RISC design.

May 1993: Apple holds a developers conference, inviting software companies to test their applications on the PowerPC-based Macintosh. None of the applications tested break the 680×0 emulator.

June 1993: Apple Computer expands its PowerBook line with the PowerBook 180c and 145B.

June 18 1993: John Sculley steps down as CEO of Apple Computer, remaining as chairman. The Apple Computer board of directors appoints Michael Spindler as CEO.

June 28 1993: The LC 520 computer is released. It was Apple’s attempt to create a viable all-in-one computer for the 90s. The device came in an attractive new one-piece case, sold for $2,000 and proved to be a popular home model. Many 520-style Macs have been produced since. The LC 520 was also released as the Performa 520. The 500 series included four main models, the 520, 550, 575, and 580, with the 520 and 550 both using different speeds of the Motorola 68030, and the 575 and 580 sharing the 33MHz Motorola 68LC040 processor. The models differed however on the rest of the hardware. The LC models in particular became very popular in schools for their small footprint, lack of cable-clutter, and durability. The Macintosh TV is closely related to this series, using the same case (in black instead of platinum) and a logic board similar to the Macintosh LC 550. The compact Color Classic series shares many components, and is able to swap logic boards, with the early 500 series machines.

The Macintosh LC 520 (codename: “Hook”) was introduced in June 1993, and was the first of the LC 500 series. The LC 500 case design was larger than the compact Macs, with a significantly larger screen. The 520 was discontinued in February 1994, when it was replaced by both the faster but otherwise essentially unchanged Macintosh LC 550 and the new, 68LC040-equipped Macintosh LC 575.

August 24, 1993: Apple loses its appeal of the ruling in favor of Microsoft in June, ending its legal battle against Microsoft Windows.

September 1993: Star Trek: 25th Anniversary becomes the top selling Macintosh computer game in the USA during the month of September.

November 15, 1993: Apple Computer discontinues the Apple IIe computer line and drops it from its product list. In its 17 year history, 5 million units were shipped.

November 1993: At the Comdex trade show, Apple Computer demonstrates a Macintosh Quadra 610 with an Apple-designed 486SX board, running MS-DOS.

November 1993: SimCity 2000 is top selling Macintosh computer game in the USA during November.

January 5, 1994: Apple announces eWorld, an online service for Apple tech support and a virtual shopping mall. It is to replace AppleLink.

January 1994: Apple Computer shows its first PowerPC product, an upgrade board with a 66 MHz PowerPC 601 microprocessor, for many of Apple’s Centris and Quadra Macintosh computers.

January 1994: At Macworld Expo, Newer Technology introduces the Quadra Overdrive at Macworld Expo. The clock-doubled accelerator boards fit in the 68040 socket of the Macintosh Quadra or Centris. Processor speeds of 40 MHz and 50 MHz are available, for US$1700.

January 1994: Apple announces that it will license System 7.x OS to other hardware companies.

January 1994: SimCity 2000 is declared top selling Macintosh computer game in the USA during the month of January.

February 1994: Apple Computer introduces QuickTime 2.0, with interactive television, music and full-screen video support (it will be released in June 1994).

February 1994: Apple ships Macintosh Application Environment 1.0 for the HP-UX operating system with the Motif interface, and the Solaris OS with the OpenLook interface.

March 4, 1994: Apple introduces the Newton MessagePad 110 handheld computer, featuring 1 MB RAM, 20-MHz ARM610 processor, and runs on four AA batteries. Remote data transfer rate is 38.5 kbps. Battery life is five times that of the Model 100. Introductory price is US$599, but it will drop to US$499 in a few weeks. The Newton MessagePad 100 contains improved software in ROM.

March 1994: Apple Computer releases the System 7.1 OS for the Macintosh. The company discusses its next-generation operating system, code-named Copland, due for release in 1995, and Gershwin for 1996.

June 1994: Apple discontinues the DOS Compatible Card after only 2.5 months of offering it. At the same time, Apple Computer introduces a prototype DOS compatibility card for the Power Macintosh. It uses a 50 MHz 486DX2 and has support for networks and SoundBlaster.

June 1994: Apple Computer introduces Macintosh 630 line of computers, as well as the PowerBook 150.

August 24, 1994: Bob Dylan files suit in US Central District Court of California in Los Angeles for trademark infringement of Apple Computer’s Dylan programming language. Dylan and Apple quickly settle out of court, licensing use of the trademark name.

August 1994: Doom is top selling computer game in the USA for the month of August.

September 7, 1994: Apple Computer announces its intention to license the Macintosh operating system in 1995. The same day Mac OS logo is announced, which will be used to identify Mac application programs and Mac-compatible systems.

September 1994: An appeals court agrees with the June 1993 ruling against Apple Computer in its March 1988 suit against Microsoft and Hewlett-Packard. Apple immediately files an appeal of its suit versus Microsoft with the US Court of Appeals for the Ninth Circuit.

September 19, 1994: Apple announces it would initially sign up a maximum of six Mac licensees, with no restrictions imposed on them.

October 1994: Apple Computer expands its Macintosh Performa 6100 line with five new computers based on the PowerPC.

November 7, 1994: Apple Computer, Motorola, and IBM announce that they will create a computer platform to run all major operating systems, except the Intel x86-based Microsoft Windows 3.1 and successors. Apple Computer will port the Mac OS to this platform, and license other vendors to create Mac-compatible computers. IBM will port OS/2 and AIX, SunSoft will port Solaris, Motorola will port Windows NT, and Novell will port NetWare.

November 13, 1994: The Fox Broadcasting Company airs The Simpsons TV show episode where a character writes “Beat up Martin.” on a “Newton” handheld computer with green apple and worm logo, which interprets the writing as “Eat up Martha.”

December 19, 1994: Apple files a write of certiorari with the US Supreme Court asking justices to review the case of Microsoft copyright infringement in Windows. 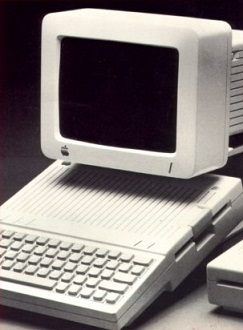