The iMac Core 2 Duo / 3.06 with 24-inches screen introduced in early 2009 is almost identical to the iMac Core 2 Duo Aluminum 24-inch of the previous year 2008. This is the all-in-one desktop computer in a glass and aluminum one-piece casing behind the 20-inches screen, mounted on an aluminum stand with a slightly tapered foot and an adjusting hinge. Yet the hardware had been revised. The memory clockspeed was increased up to 1066 MHz, the memory type was also upgraded up to DDR3. The entry-level iMacs of 2009 sports Nvidia Geforce Graphics, while top models – ATI Radeon. The FireWire “400” port was dropped for an extra USB port thus making four of them in total and the Mini-DVI was swapped for Mini DisplayPort. The processor remained the same. The Core 2 Duo 3.06 24-inches (Early 2009) features a 3.06 GHz Intel Core 2 Duo processor (E8435), with two independent processor “cores” on a single silicon chip, 4 GB of RAM, a 1TB GB Serial ATA hard drive (7200 RPM), a slot-loading DVD+R DL Super Drive, NVIDIA GeForce GT 130 graphics with 512 MB of dedicated GDDR3 memory, a built-in iSight webcam, a microphone and stereo speakers, as well as a Firewire “800” and 4 USB 2.0 ports. It also has built-in draft and enabled AirPort Extreme (802.11n 802.11a/b/g/n) and Bluetooth 2.1+EDR, Gigabit Ethernet and Mini DisplayPort capable of supporting a second display. The cooling system is CPU controlled and the in-built speakers are mounted beneath the 24” screen for the sound to bounce off the desk or other surface. The speakers’ grills also work as the vent ones. The iMac “Core 2 Duo” 3.06 20-inch (Early 2009) is shipped with a smaller Apple Keyboard short of the numerical keypad and Mighty Mouse. 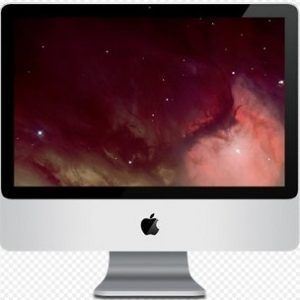