The October 30, 2018 introduced iPad Pro most notably features a brand new all-screen design with a Liquid Retina display from edge to edge, made possible through the removal of the home button and smaller bezels. Alongside a more squared-off look in comparison to its more curved-like predecessor, the iPad introduces a set of new to the device features – for instance, a new charging and connectivity to camera support system, and Face ID, allowing for a fasts secure unlocking of the iPad. The 2018 model’s A12X Bionic chip is described as the most powerful chip Apple had produced at the time of the device’s launch. Promptly after its release, the iPad Pro was generally acknowledged as being more portable and powerful than Apple’s last iPad version.

The variations of the 2018 model include the Wi-Fi only version, featuring dual-band 802.11a/b/g/n/ac Wi-Fi, and its Wi-Fi and Cellular supportive sibling. Aside this variation in the two models’ connectivity attributes, the two share otherwise undifferentiated specifications. Apple also offers a variety of the iPad’s storage capacity options, starting from 64 GB (exclusively presented in the Wi-Fi-only version) at $799 and up to its 1TB model at $1549.

Compared to its Wi-Fi only predecessor, the two models are of the same physical size, while the later device is configured with a larger display and a more powerful architecture. The 2018 model had been the first series of the iPad to have provided USB-C, allowing for a whole range of possibilities its Lightning predecessor was not able to offer.

Alongside its new iPad, Apple introduced a new Apple Pencil, with its new capability for wireless charging, a double tap feature allowing the change of tools within apple, and a magnet sticking to the side of the iPad.

Video uploaded by DetroitBORG on November 9, 2018. 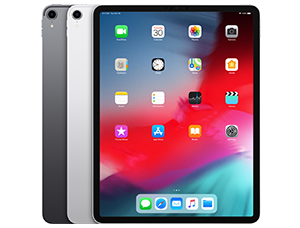