The iPod Shuffle 1st generation is the smallest MP3 flash drive music player and the cheapest among the Apple products. As the moniker Shuffle implies, the player was designed as an easy load-and-go device. It was supported by the “autofill” iTunes feature that picked up songs from a user’s collection at random and load as many of them as could fit into the player’s storage. There were two iPod shuffle models according to their storage capacity: the 512 Mb model and the 1 Gb model. The latter could store up to 240 songs. The iPod Shuffle 1st generation was designed to plug into a USB 1.1 or USB 2.0 ports but could go with an optional dock as well. It lacked the click wheel, the display, the playlist functions as well as many other:  an alarm clock, a calendar and suchlike. It had four buttons on the front to navigate the playlist. The only indicator was the battery level indicator on the reverse.

To set up iPod shuffle, you install software from the iPod CD, and import songs from your music CD collection or purchase songs from the iTunes Music Store. Then you transfer the songs to iPod shuffle for listening on the go. 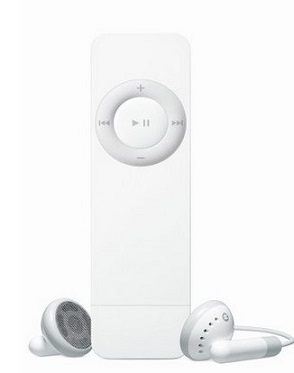