The MacBook 10,1 (12-inch, Mid 2017) was introduced on June 5, 2017. At the starting price of $1299, the MacBook offers a 1.2GHz Kaby Lake Core m3 processor with Turbo Boost up to 3.0GHz, 8GB RAM, 256GB storage and the Intel HD Graphics 615 processor. The 2017 model features a more compact design and a high-resolution Retina display, being the only MacBook to offer a choice of four iPhone-like finishes of Space Grey, Gold, Rose Gold and Silver. The combination of faster hardware and the laptop’s refreshed design and low weight sets it further aside from its predecessors.

While both the starting and the build-to-order prices of the MacBook appear to be relatively high when compared to the device’s predecessors, such phenomenon can be explained by a number of reasons, for instance, that compared to the cheaper MacBook Air, the chips used in the Air are older than those in the MacBook, not to mention the high-resolution innovative display and design of the more upscale MacBook.

Video published by DetroitBORG on June 8, 2017 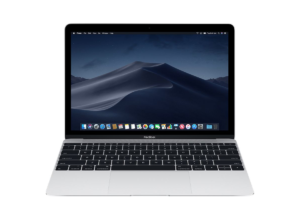