The MacBook Air 8,2 (13-Inch, 2019) announcement marks the first update to this particular line of computers to have been made since the fall 2018 release of the more compact MacBook air with improved display functions, a more expansive trackpad and innovative features, such as Touch ID. The starting price of the MacBook Air appearing at $1,099 – a $100 cheaper than the 2018 model – makes it the most affordable MacBook at the time of its release. This introduction does, however, eliminate the previously available $949 MacBook air, making it now impossible to purchase any MacBook Air for under $1000.

The external design of the 2019 rendition of the MacBook Air is similar to its original predecessor, the laptop appearing in the same gold, space gray and silver colorways the MacBook Pro is offered in.

The 2019 upgrade introduces a number of additions to last year’s release, such including, for instance, the True Tone technology featured within the computer’s Retina display, an improved keyboard identical to that of the MacBook Pro 2019, and long-lasting battery life.

One of the major focuses of the 2019 upgrade appears to be the improvement of the keyboard. The keyboard featured on the MacBook is the 4-th generation Butterfly-switch keyboard, a successor of it’s the previous generation infamous for being quite failure-prone, this reported improvement achieved by means of using a different material claimed to provided increase reliability. 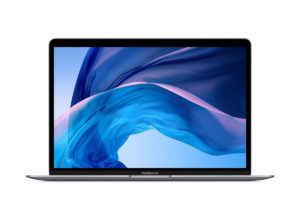