The MacBook Pro 15,1 (15-inch, Mid 2018) was first introduced on July 12. Powered by a brand new 8th generation “Coffee Lake” 2.2GHz Intel Core i7 processor, presented just a few months prior to the MacBook’s release, the laptop is configured with six independent processor cores on a single silicon chip. Like its predecessor, the 2018 version is equipped with a butterfly mechanism keyboard together with the touch-sensitive “Touch Bar” adaptable to various applications. The MacBook Pro 15,1 (15-inch, Mid 2018) features a 15-inch Retina display with the resolution of 2880x1800px at 220ppi. The newly introduced MacBook offers twice as much RAM as its predecessor, with its 32GB of RAM built-to-order option (the standard standing at 16GB).

The MacBook Pro 15,1 (15-inch, Mid 2018) display newly includes the True Tone function, signifying the color balance would now be at its most consistent – the 2018 release is the first of the MacBooks to be configured with True Tone. The computer’s previously introduced butterfly keyboard includes a membrane placed underlying each key that way preventing stuck keys and unwanted liquids from entering the keyboard.

Design wise, the 2018 model stays alike to the 2016 one with its smooth matte surface. However, the Apple logo on the lid that used to light up on the earlier MacBook models is now simply mirrored.

The MacBook Pro 15,1 (15-inch, Mid 2018) is open to various upgrades suggested by Apple, for instance, an upgrade of the processor or wider RAM for an extra cost on top of the already high original price of the computer. The two starting configurations of the 2018 MacBook Pro are the 2.2GHz Core i7 with its 256GB of SSD storage and the 2.6GHz Core i7 model with 512GB, additionally presented with an advantageous graphics set up.

Through the various tests undertaken by the latest model, it has proven itself to be a long-lasting laptop, running around 10 hours against the standard premium laptop average of approximately 8 hours.

Video published by AppleInsider on July 28, 2018 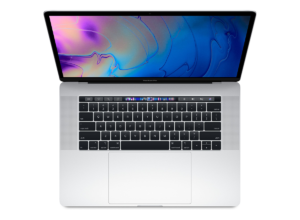