The Apple Mac mini 8,1 (Late 2018) was initially introduced on October 30, 2018. The starting model is coming with the advanced “Coffee Lake” 3.6 GHz Intel Core i3 processor, the Mac is equipped with 128 GB SSD storage and an Intel UHD Graphics 630 graphics processor. As its predecessor, the Mac mini is offered by default without display, keyboard or mouse, of which, however, there is a vast array available on the market of both Apple and third party product.

While being externally similar to its predecessor, one of the more obvious differences lies in its Space Gray colorway, not previously offered by the Mac series. Despite the visual similarities to the older Mac, the device’s processor has been majorly advanced. So, in fact, has its now modern connectivity.

Apple offers two stock models of the Apple Mac mini 8,1 (Late 2018): the Mac mini 3.6GHz Intel Core i3 and the 3.0GHz Intel Core i5, together with the build-to-order 3.2GHz Intel Core i7. All three of the models feature the characteristic Space Gray aluminium casing and the same array of ports: the difference between the models lies solely in the speed of their processors.

The Mac mini’s 6-core processor, its four independent processors running on a single chip, offers twice the amount of processing cores than its Mac mini predecessor. 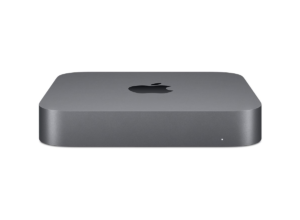