By 1995, Apple computers accounted for around 7% of the worldwide desktop computer market. By that year illegal Apple clones no longer existed, and the company decided to launch an official clone program in order to expand Macintosh market penetration.

The clone program entailed the licensing of the Macintosh ROMs and system software to independent manufacturers, who had to pay a flat fee for a license, and a royalty for each clone computer they sold. The initial royalty to pay was established at $50. Many company acquired the licence and produced computers: Power Computing, Motorola, Radius, APS Technologies, DayStar Digital, UMAX, MaxxBoxx, Bandai (Apple Pippin), Tatung and others.

For more than two years, it was possible to buy PowerPC-based clone computers running Mac OS. But Apple executives were worried that high-end clones were cannibalizing sales of their own high-end computers, where profit margins were highest. Many Apple experts complained that licensing clones was financially unfavorable.

When Steve Jobs returned to Apple in 1997, he halted negotiations of upcoming licensing deals. The clone makers’ licenses were valid only for Apple’s System 7 operating system. After Apple released Mac OS 8, the clone manufacturers who couldn’t ship a current Mac OS version had to stop production. Only UMAX ever managed to obtain a license to ship OS 8, which expired in July 1998. Thus Apple ended the cloning program.

The End of the Clone Era

Steve Jobs had meetings and discussions with Compaq, Sony and a few other companies about licensing them, but these negotiations fell through.

Later, with the success of the iPod, Dell and other computer manufacturers have expressed renewed interest in creating Macintosh clones. But Apple didn’t plan to allow running Mac OS X on anything other than an Apple Mac.

When were the clones built? – Most of the Apple II clones were produced between 1982-1984, which was the time when the Apple II was most popular. Then clone production began to slow.

How many clones were manufactured and sold? – No one really knows, but we can talk about tens of thousands clone computers sold around the world. In fact, most of the companies that built specific models of Apple II clones were small, and it is almost impossible to keep track of their operations.

How many clones can be found today? – Very few, as most of the old computers that were bought back in the 1980’s were thrown away long ago. Some of them have survived through the years, but there might not be any of particular models.

Who built the first Apple II clones? –  The two computers that are commonly thought to have been first are the Franklin Ace 100, and the Pineapple. Some sources mention the Basic 108 as the earliest, the assumption based on the date of its advertising (Basis 108 “Non-Fruit Alternative” ad in the March 1982 issue of International Apple Core magazine).

Why many companies produced clones? – At that epoch, the demand for Apple II computers was high. Clone makers could sell Apple II compatible computers for much less than the real thing, as the Apple II was an easy and cheap computer to duplicate, so many could afford a cheap imitation at half the price.

I have an Apple clone, what is it worth? – Impossible to answer without analyzing all the aspects, as prices can vary quite a bit due to many variables. Some clones are of a better quality in terms of compatibility and appearance. Some of them may be broken, and some other are fully functional, and this also influences the price. Today, realistically, an average clone can be sold at less than $100.00, but the price can be much higher for particular clones. However there are some clones that collectors watch for. For example, a very rare Polymax Maxxi is worth thousands of dollars, and a nice B&H or ITT 2020 can be sold for $300 or even more.

Where can I purchase a clone of my own? – Some clones are rather common than others. For example, the Franklin Ace 1000 and the Laser 128 are easy to find on eBay. Altogether, eBay may be the best place to look for an Apple clone today is eBay. Of course, many other websites offer clones for different prices and in different conditions. A trick: don’t be afraid to buy a dusty and  dirty old computer if what you are looking for is a vintage device, as computers are easy to disassemble and clean (you’ll probably want to take it apart and clean it even if it is in good shape).

Video uploaded by applefanboy3000 on June 11, 2011.
In the post Steve Jobs era, Apple started licensing other companies to produce Macintosh clones. And there was a new Mac operating system 8.0, code named Copland. This program looks at the new Mac clones and the new OS. Products demonstrated include the System 100 from Radius, the Genesis MP from DayStar Digital, and the Power 100 from Power Computing. Applications demonstrated include Adobe Photoshop and Personal Oracle 7. Also featured are the new Apple Macintosh 7100 and 8100 models. Originally broadcast in 1995. 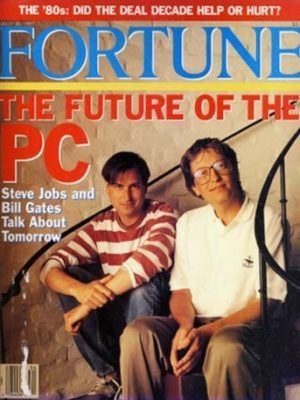