Released in 2009 the iPod shuffle 3rd Gen colors remained the same as the previous shuffle 3rd gen models in everything except colors. They are being offered also in green, pink and blue. The three control buttons in the earphone cable remained: volume up\volume down and action. With the last a user can either choose between playlists or activate the brand-new iPod feature – Voice Over. Apple titled the iPod shuffle 3rd Gen as the first player that talks to you. It can speak the names of songs, artists and playlist titles in 14 languages depending upon the language of a song on you playlist. The player also can voice the battery charge remained. Press and hold the action button for songs and artists and press and hold until the tone for playlists. This feature was to make up for the lack of the screen. The 2 Gb model was added to the line-up.

How to Charge the Battery of iPod Shuffle 3rd Gen

You can charge the iPod shuffle battery in two ways:

To charge the battery using your computer:

To charge the battery using the Apple USB Power Adapter:

How to Check the Battery Status

You can check the battery status of iPod shuffle when it’s connected to your computer or disconnected. The status light tells you approximately how much charge is in the battery.

Warning: Make sure the power adapter is fully assembled before plugging it into a power outlet.  Status light when connected: 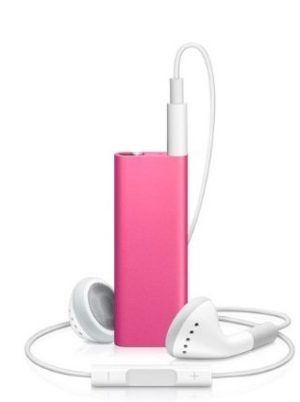