Hello! It’s so nice of you to stop by on this page. Here’s our FAQ page we tried to make the best. You’ll find the answer to any question you ever wanted to ask, but have never got around to. And even more! We tried to encompass every aspect: products’ names, makes, models, specs, guides, tips and lifehacks if there is any. We also added FAQs about how to make your Apple device ready for sale and save your private info meanwhile. We hope, you’ll find these FAQ useful. If there’s anything you’d like to clarify, or if you feel we’ve omitted something important, don’t hesitate to post a feedback comment in the bottom of the page.

A Few Words about Apple

When Steven Wozniak designed what would become the Apple I, in 1976, his friend Steve Jobs, who had an eye for the future, insisted that they try to sell the device, and so Apple Computer was born on April 1, 1976. The very impressive Apple II followed suit in 1977, being the first personal computer in the world to include color graphic and to come in a plastic case. Orders for the revolutionary machines came by hundreds and then by thousands… In 1978, with the introduction of the Apple Disk II, the easy to use and the most inexpensive floppy drive ever, Apple Computer became a real threat to the old sleepy hollow known in the Universe as the planet Earth.

With the increase in production and sales, came an increase in company size. By 1980 a few thousand employees worked for it. The same year, the Apple III machine was unveiled and the company sold its first computers abroad. By the end of 1980, however, things got a bit more difficult, as a saturated market (well, the meaning of “saturated” is rather conventional, we mean “saturated for that epoch, when one out of thousand had a computer on their desks) made it more difficult to sell computers. As a result, in February 1981. Apple was forced to lay off 40 employees. Besides, Steven Wozniak was injured in a plane crash, took a leave of absence and returned only briefly. In March 1981, Steve Jobs became chairman of Apple computer. The great revolution began and the world exploded.

By the way, the year 1981 was a great year in the history of mankind, as Mel Brooks released his History of the World (Part I) movie and the same year, IBM released its first Personal Computer (PC for short). With the power of Big Blue behind the engine, the PC quickly dominated the playing field in our corner of the Milky Way. Steve Jobs’ team would have to work quickly if they hoped to compete with IBM in the computer market. Jobs realized that Apple would have to change. In April, John Sculley, ex-president of Pepsi-Cola, became president and CEO of Apple. Well, Steve Jobs believed John Sculley would help Apple grow up, but had no idea how right he would turn out to be. Eventually, Sculley’s nomination cost Job’s his job and Sculley became the de facto head of Apple in May 1985.

Curiously enough, over the next few months, Apple lost a fifth of its work force, as some 1,200 employees had to be laid off, and at the same time the company posted its first quarterly loss since April 1976. The results eroded confidence in Sculley’s abilities as CEO of Apple. Besides, John Sculley became locked in a epic battle with Microsoft’s Bill Gates over the introduction of Windows 1.0, which had many similarities to the Mac GUI. Bill Gates finally agreed to sign a statement to the effect that Microsoft would not use Mac technology in Windows 1 (but the agreement said nothing of future versions of Windows, and Gates’ lawyers made sure it was airtight). Well, Apple had lost exclusive rights to its interface design (and the unfortunate agreement would prove to be an important document in future lawsuits between Apple and Microsoft, involving the Windows interface).

What brought Apple and Macintosh out of the hole were the twin introductions of the LaserWriter, the first affordable PostScript laser printer for the Mac, and PageMaker, one of the first Desktop Publishing programs ever. These two in tandem made the Apple computer an ideal solution for inexpensive publishing, and the Mac became an overnight success, again. In 1987, Apple introduced the Mac II, which made the Macintosh line a viable and powerful family of computers. Apple was a “Wall Street darling” again, (and we quote Rolling Stone magazine here) shipping 50,000 Macs a month. It seemed in 1989 that Windows would be a flop, and the Mac would be riding high for the next decade… Well the story just begins, but we will stop here and let you read our great encyclopedia. Enjoy your reading! 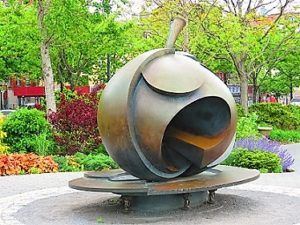