Conceived by the Apple Inc. as portable digital media player and multi-purpose pocket computer which can serve as external data storage device, the first iPod was released in October, 2001. iPod can use iTunes software and third parties software to transfer data, such as music, videos, photos, e-mail settings, and so on to the computers supporting these features.

The iPod line came from Apple’s digital hub, when the electronic giant decided to join the market of personal portable music players. Apple’s hardware engineering chief Jon Rubinstein assembled thus a team of engineers to design the iPod, but Apple did not develop the iPod software entirely in-house. It used instead PortalPlayer’s reference platform for their first iPod.

The name iPod was proposed by Vinnie Chieco. The name recalls the famous phrase used in 2001: A Space Odyssey movie: Open the pod bay door, Hal! Originallly, the phraserefers to the EVA Pods of the Discovery One spaceship. The current iPod models user several color schemes.

The iPod line uses many accessories. Many of them are made by Apple, but a large number of accessories is marketed by third party companies. Some accessories add extra features, such as sound recorders, wired remote controls, FM radio tuners, audio/visual cables for TV connections. Some of them offer unique features like the Nike+iPod pedometer and the iPod Camera Connector.

As to video games, they are playable on various versions of iPods. Third parties like Sega, Square Enix, Namco, Electronic Arts, Hudson Soft all making games for the iPod. The games are in the form of .ipg files. 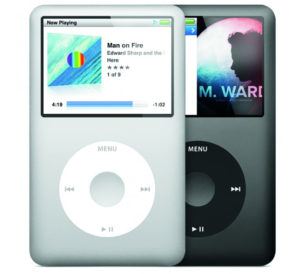